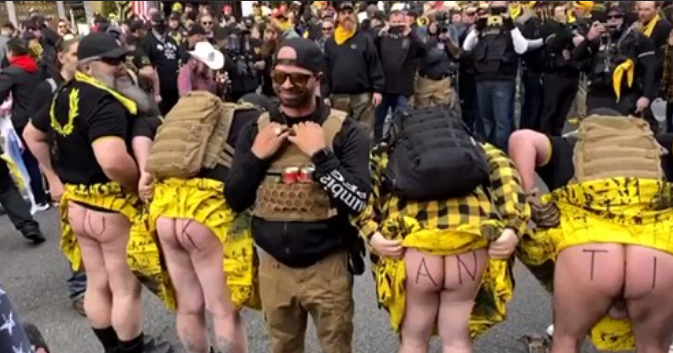 Violence erupted in downtown Washington and historic black churches were attacked on Saturday at a mass rally in support of President Donald Trump’s doomed attempt to deny that he lost last month’s election.

An extreme rightwing group of Trump supporters known as the Proud Boys marched through the city in military formations, chanting “Whose streets? Our streets.”

They tore down a Black Lives Matter banner and sign from the Asbury United Methodist Church, one of the oldest Black churches in the city, and set the banner on fire.

The senior pastor at the church, the Rev. Ianther M. Mills, said demonstrators who were part of pro-Trump gatherings “tore down our Black Lives Matter sign and literally burned it in the street. It pained me especially to see our name, Asbury, in flames. For me it was reminiscent of cross burnings.”

A Black Lives Matter sign was also torn down from the Metropolitan African Methodist Episcopal Church.

At least four people were stabbed as the Trump supporters clashed with police and anti-Trump protestors.

The air was thick with angry talk of defiance and revolution against the incoming administration of Joe Biden, who beat Trump in the election.

Radio host Alex Jones told the crowd that “Joe Biden will be removed one way or another.”