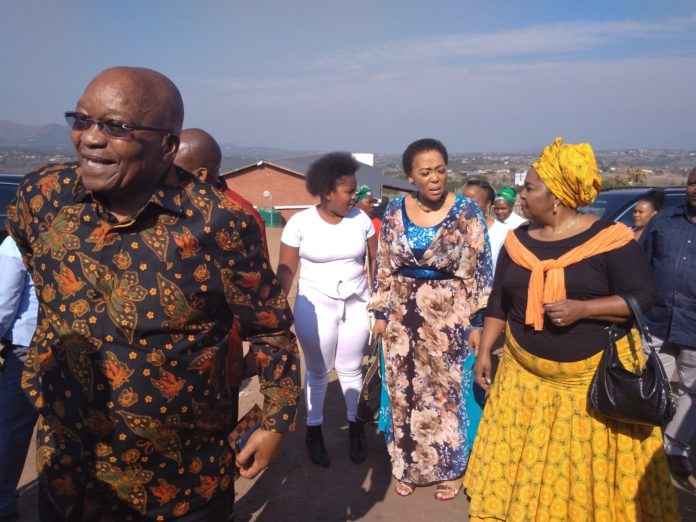 Former President Jacob Zuma is running out of excuses to prevent his day in court.

But it’s finally come down to a woman.

Zuma has long resisted going in front of the Zondo Commission.

Now he is calling on its chairman Deputy Chief Justice Raymond Zondo to recuse himself.

Zuma has claimed that Zondo is biased against him.

The reason Zuma gives is that Zondo had a child with a sister of one of former president Jacob Zuma’s wives, Thobeka Madiba.

This happened more than 25 years ago.

Zondo cleared the air on Thursday about the personal family connection with Zuma.

Zondo said in a statement that in the mid-90s “when I was in my 30s and was still in private practice as a lawyer – I got into a relationship with a certain woman, out of which a child was born. That relationship ended during the 1990s.”

Zondo said that no one at the time knew that “the woman’s sister, Ms Thobeka Madiba, was, many years after that relationship had ended, to get married to Mr Jacob Zuma.“

He said that to his knowledge, Zuma had no relationship with Thobeka Madiba in the mid-1990s.

“That Mr Zuma happened to marry the sister of a woman with whom I had a relationship, that had ended so many years before that marriage, has never had any bearing on the execution of my judicial functions in the many matters involving Mr Zuma in which I have sat as a justice of the Constitutional Court since 2012, nor does it have any bearing on the execution of my duties as chairperson of the commission.”

This explanation has not dissuaded Zuma’s most militant supporters.

The grouping, known as “The RET President Zuma Support Group”, is expected to march to the commission and the Constitutional Court on Friday.

Leader of the Zuma support group, Carl Niehaus said: “In fact, the commission has shown itself to be very selective in those that it approaches and in terms of the evidence and information that it hears and allows to be tabled.”