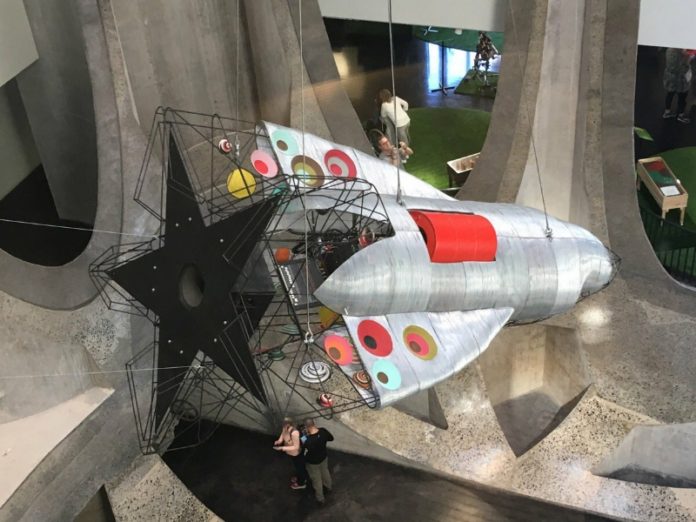 There is a longstanding relationship between dub music and the African diaspora, the communities across the world who either left or were taken away from Africa.

The artists behind African Robots vs SPACECRAFT tapped into this tradition with a work of art known as Dubship I – Black Starliner.

The six-metre sculpture of a spacecraft was created by wire artists including Ralph Borland, Jason Stapleton, Lewis Kaluzi, Farai Magirimani, and Wellington Moyo.

According to Borland, wire models represent an age-old method of capturing modern technology. So in the past, there were wire models of buses, motorcars, or trains.

The Dubship I project brings this idea into the future in many different ways.

For example, the spacecraft plays dub music playing from a built-in sound system.

Another feature of the ship is a rotating oil barrel punctured with small holes, with a bright light placed inside it. As the barrel rotates, light passes through the holes at various times and hits certain sensors. These sensors then trigger the striking of objects to create sounds.

Aside from being a fascinating artwork, the Dubship I touches on concepts that are relevant to the African diaspora experience.

It belongs to the Afrofuturist category of art, and is often about the desire of displaced people to return to their homes or to escape to another time and place.

In one of his papers, author Mark Fisher suggests that the abduction of African slaves by colonists not only removed them from their home, but also from their own timelines.

He suggests that the slavers thrust them into a future world of exploitation.

He writes that dub music and its origin in technological exploration mirror this desire to escape the displacement of time and place.

The original Black Star Line was a black owned shipping company founded by Marcus Garvey in 1919.

Its goal was to migrate descendants of American slaves back to Africa, reflecting this desire to escape and return home.

The Dubship 1 project is moving to a new phase as the creators are building a virtual reality model of the sculpture.

Viewers will be able to interact with the ship in the virtual world, view speeches by Marcus Garvey, and listen to mighty dubs.