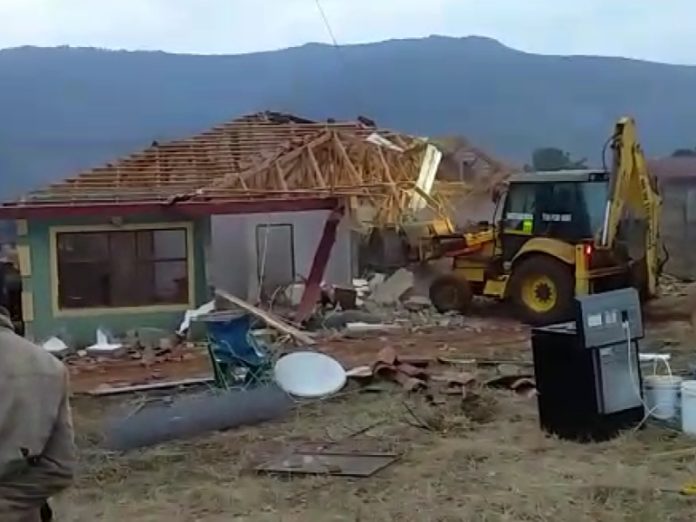 As if leaving his wife for another woman after 12 years of marriage was not enough, the man showed up a year later to clear out her belongings and claim the house for himself.

Fed up, Fulufhelo Matumba got her own back. She used an excavator to completely demolish their six-room house.

After leaving her in 2018, Matumba said that she eventually learnt to accept her husband’s decision. She even learnt how to live happily in their marital home in the village of Mandala in Thohoyandou, Limpopo, which she had built herself.

But when the 43-year-old woman came home from work one day to find her husband, Khathutshelo Mathohoho, and about ten other men moving her belongings to her parents’ house, she was more than livid.

Matumba took the matter to court. After a tense legal battle which ended this week, the court ruled that the couple should live in the house together.

“I built the house from scratch and also bought the site from my father in law. The court told me to stay with him in a house that I built alone,” Matumba told Scrolla.Africa.

But she wasn’t having any of it.

In full view of the community, the enraged woman used an excavator to demolish her six-room house on Tuesday morning.

“I decided to do what I did and have no regrets about that. After all, it is my labour and sweat,” she said.

“That man even boasted that he found a woman who satisfied him sexually. It won’t happen in my house.”

“We are devastated and in shock as a family, please give us space, maybe we can talk tomorrow,” his brother said before hanging up the phone.