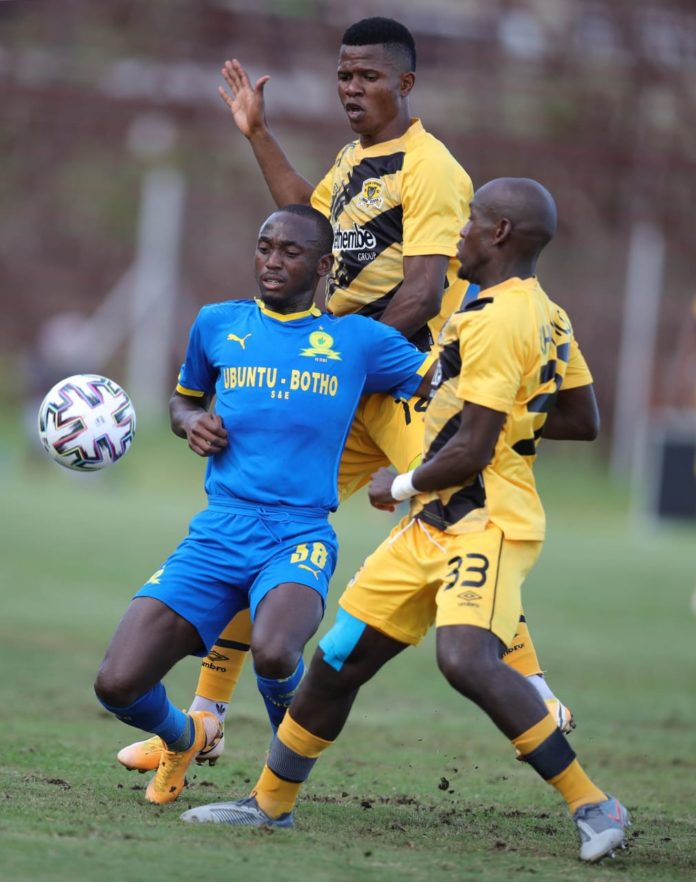 Mamelodi Sundowns are three points clear at the top of the DStv Premiership after coming from a goal down to win 2-1 away against relegation strugglers Black Leopards on Wednesday.

The reigning champions were forced to play with ten men for more than 30 minutes in the second half after Mothobi Mvala was sent off.

Mvala, who played as centre back in this match, was given a straight red card for committing a professional foul when he pulled the jersey of Rodney Ramagalela who was about to score. Downs managed to keep their unbeaten run and in the process widen the gap between them and now joint second place SuperSport United and Swallows.

The two teams however each have a game in hand and since they play each other on Saturday, the winner will catch up with Downs.

Sundowns were forced to show their championship character after falling behind early in the second half. Ovidy Karuru put Leopards ahead in the 56th minute. Peter Shalulile scored twice (in the 64th and 95th minutes) to give the visiting team a crucial win.

“We keep letting in cheap goals. First it was against Swallows and now today,” said coach Manqoba Mngqithi.

“It surprised me to see us playing better when we were one man short than when we had full numbers. But I’m happy with the fighting spirit of the boys, they came back and got the maximum points.”

Before this match Sundowns had played three consecutive draws. As for Leopards, who remained second from bottom, it was their third straight defeat since their Orlando Pirates win two Sundays ago.

The league match that was scheduled for Wednesday between Bloemfontein Celtic and Chippa United at the Dr Molemela Stadium was called off due to heavy rain.

In other news Celtic have lodged an appeal to the Court of Arbitration for Sport (CAS) against FIFA’s decision to impose a transfer ban on the club.

The world football governing body is reported to have imposed a one-year transfer ban against Celtic for allegedly failing to pay former goalkeeper Patrick Tignyemb a certain amount of money for his unfair dismissal.

Tingyemb took Siwelele to FIFA for unfair dismissal about two years ago before joining Chippa United, with Celtic CEO Khumbulani Konco now confirming the matter is with CAS.