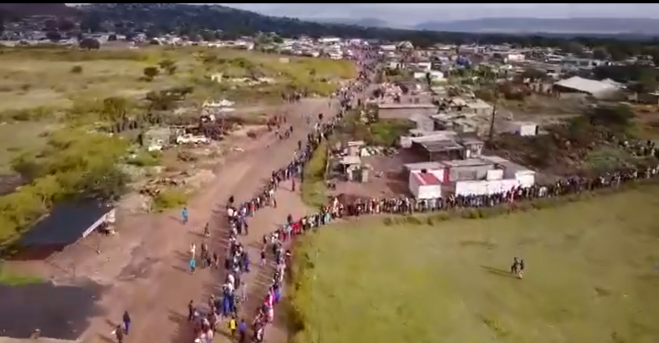 “Starvation and desperation” – that’s what Professor Nick Binedell sees in the community of 40 000 people in Mooiplaas, Pretoria.

Binedell says the government relief programmes he has seen excluded foreign nationals. “It seems that only those with South African ID are eligible for food parcels and grants.”

Most of these people have neither jobs nor food.

Binedell, a professor at Pretoria University, says he and his friends organise food parcel donations to desperate people in nearby communities – especially the excluded group of foreign nationals.

On Wednesday his team donated about 5 000 food parcels. “It is disheartening to see how much people are suffering,” he said.

“When we announced to community leaders that we would be donating the food to the community, thousands swarmed to get their share of the parcels.”

He says the kilometres-long queue was difficult to manage at first, but it was controlled when police helped.

Binedell is shocked at the level of inequality and discrimination he says government is showing against foreign nationals. “If the foreigners had to be excluded because they don’t have the right papers, why did they allow them to get into the country?” he says.

Desperate foreign nationals were not the only people in the queue. About a third of the people who arrived for food donations, the poorest of the poor, were South Africans.

Doctor Mabila, who heads this project on the ground, says “Whenever I go to these places, I see hunger in the eyes of many people. Mostly those from Zimbabwe, Mozambique, Lesotho and other African countries.

“The pandemic didn’t come for South Africans only. It has hit all people across the globe. It is wrong to discriminate when helping them,” he says.

“People are hungry. It is a desperate call for government to consider all humans equal when helping locals during this hard time.”

Most of the people in these communities don’t have work, Mabila says.

“They have no other way of supporting themselves and their families.”