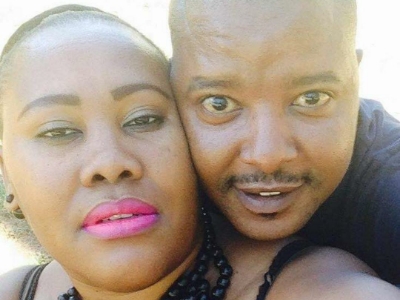 Dimakatso Ratselane, the Lesedi FM current affairs presenter, endured a marriage from hell for five years, culminating in being stabbed by her husband 29 times.

“She was very scared of him. He threatened her all the time,” said family spokesman Tsietsi Mohoalali who is also Dimakatso’s colleague at SABC’s Lesedi FM in Bloemfontein.

The family said the husband beat her regularly and threatened her with the worst if she ever told anyone.

Mohoalali told Scrolla.Africa: “The husband fetched Dimakatso from work and they were going to get their baby in Mangaung. The quarrel started while they were driving and the husband started stabbing her inside the car.”

Dimakatso managed to open the door and fell out of the car. The husband fled on foot with the car keys. She was kept at a house while an ambulance and police were called.

The car with the blood-splattered interior was taken away by police. The knife was found inside.

“Only a few people were allowed to see her,” he said.

“We don’t even know the reason for the latest attack because she couldn’t speak. But we will also not allow her to relive the events of that tragedy. It’s too early.”

The couple had been married for less than five years and lived in Mandela View.

Another Lesedi FM staff member said: “He is a bully who needs to be taken away from us.”

He told Scrolla.Africa a case of attempted murder was opened at Kagisanong police and the manhunt for the suspect has been launched.

He appealed for anyone who might know the whereabouts of the suspect to contact Crime Stop or the MySAPS App.

CAPTIONS: Photos of Dimakatso Ratselane and her husband and wanted suspect McKenzie Ratselane during their happier times.