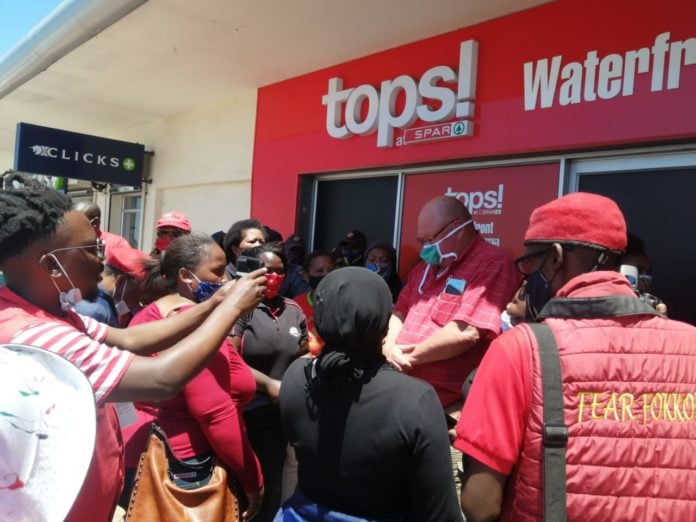 Seventeen workers at the Waterfront Super Spar in Humewood, Port Elizabeth won their unfair dismissal case against their boss.

But he is firing them anyway.

It all started in June when three workers at the bakery section tested positive for Covid-19.

The management ordered them to keep their status as secret.

But the workers revealed their status to their colleagues.

Then 20 of the workers walked out of the shop and demanded to be tested and for the shop to be fumigated.

One of the 17 workers, Vuyelwa Mbula, 51, from Motherwell said: “We went for testing and all our results came out negative. But only three workers were allowed to come back.

“We then approached Numsa to represent us at the CCMA and we won the case.

“We were ordered to report for duty on 2 November,” she said.

But the owner Howard Robertson is refusing to take them back, claiming that his business was severely affected by Covid-19.

Mbula who has worked at Spar as a chef for nine years said the employer refused to follow the CCMA ruling but instead offered them retrenchment packages.

“Instead of allowing us to report for duty he served us with notices of retrenchment. We came back on 9 November and our boss asked us to write letters and give reasons why we don’t want to be retrenched. Then we decided to approach the EFF.”

Khanya Ngqisha, the EFF regional head of labour matters said, “We don’t care about the loss his business had suffered because of Covid-19.

“We want these workers to be reinstated as per the CCMA award or be given an option of packages.

“Also these workers should be given their outstanding salaries.”

Robertson has told the EFF and the workers to return to the CCMA.

“If you don’t want to listen to what I am telling you, you should go back to the CCMA,” he said.

The EFF has vowed to return to protest outside the shop next Tuesday.