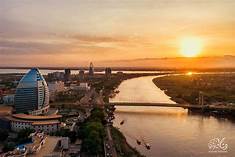 South Africa’s Deputy Ambassador to Sudan has been accused of involvement in a bizarre murder plot.

Zabantu Ngcobo and her partner are being investigated for allegedly hiring hitmen to kill the embassy’s intelligence officer because he was sending home damaging reports about her, Khartoum’s Al-Sudani newspaper reported last week.

The hitmen included the embassy’s driver and an accomplice.

The men told Sudanese police that they lured two young Sudanese women into Ngcobo’s apartment in December last year and murdered them as a ‘training’ exercise. Ngcobo was acting Ambassador at the time.

The newspaper reported that one was dismembered, her body dumped in separate plastic bags outside the city, and the other’s corpse was found wrapped in a shroud on a rubbish dump.

The men were arrested before they could kill the intelligence officer.

Daily Maverick reports that South African authorities exercised the right of Ngcobo and her partner to diplomatic immunity against arrest and prosecution abroad.

They are assisting the Sudanese authorities with the investigation.

Ngcobo and her partner remain in South Africa.