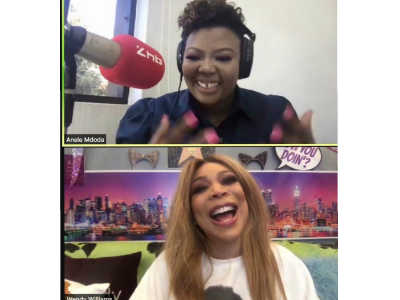 From now on, 10 April is Wendy Williams day.

Speaking on Wendy’s After Show, Williams said popular radio host Anele Mdoda who had a virtual meeting with her said that day would be her day.

Williams spoke to Mdoda about her upcoming Wendy Williams movie and biopic which will be aired on Lifetime Africa on 10 April.

Mdoda took to Twitter to speak about rumours that she told Williams that she had a day reserved for her in South Africa.

She tweeted: “Yes guys, it was me who told Wendy Williams that because it is the truth.”

She also tweeted in the early hours of Wednesday morning, saying: “10 April. @LifetimeSA will screen #WendyWilliams movie and doccie! You know you will be watching. My interview with Wendy will play on my radio show the day before and you can hear about Wendy Williams Day #AneleandtheClub.”

South Africans expressed the humour behind Mdoda convincing Williams that she had a holiday dedicated to her. Although there might be a bit of misunderstanding from Williams, it provided South Africans with plenty of humour.