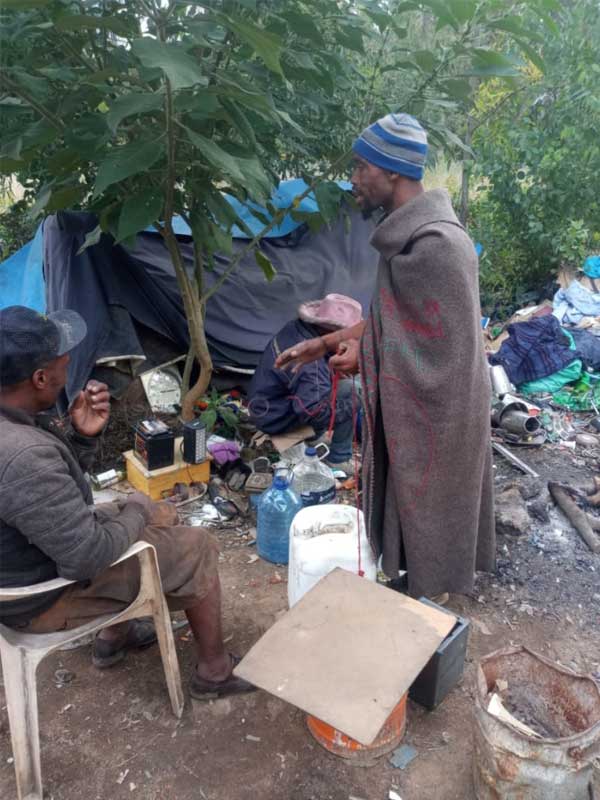 When even the trash is gone

Each morning, Modikwe Modikwe wakes up wrapped in a dirty blanket.

The first thing he does is light a fire to warm himself.

He then boils water in a fish tin to make a cup of tea.

As the sun gets warmer, Modikwe, pictured above, usually drags his trolley and heads to the streets of Sandton to collect rubbish. This has been his main source of income the past 13 years.

He says the place where he stays has no toilets, no running water and no electricity. The plastic paper shacks get colder at night and hotter during the day.

But one day, he woke up to an unusual quiet in the suburbs. “There was no sight of maids and gardeners taking the bins out to the pavements.”

“We had no television or radios to hear about the national lockdown announcement. I didn’t know about it.”

The lockdown has completely changed his life.

“The little money I make from selling the waste is what makes me and my family survive. I support my three children and two siblings back home in Limpopo. It doesn’t sit well with me that I won’t send money to my family this month because we didn’t work due to the lockdown,” says Modikwe.

Modiwe is the leader of a group of waste pickers living along the freezing river banks of Braamfontein Spruit River that runs through the rich suburbs of Parkmore and Bryanston.

That same day dozens of waste pickers were offered food parcels – in Innesfree Park in Sandton.

The parcels were arranged by Supplier Development Initiative (SDI), a company co founded by the President’s son, Andile Ramaphosa, who had heard of their plight. His partner Brad Fisher says they donated food parcels to 1030 people that day.

Each one of them received: