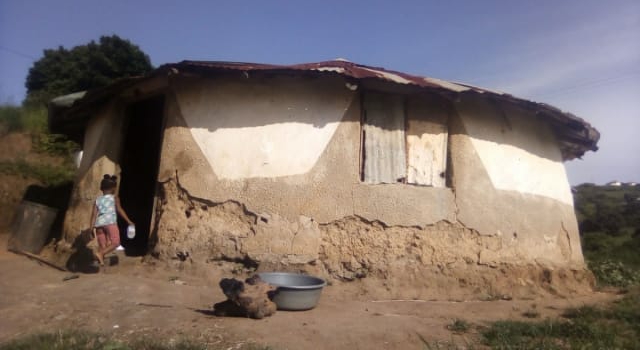 Life was tough while their mother was alive, but since her death in 2016, the life of the Phewa children in a crumbling mudhut has been a daily struggle for survival.

The siblings aged between seven and 16, have been waiting four years for an RDP house.

The family are among 55,000 children living in a total of 33,000 child-only households across South Africa in 2018, according to a study by the University of Cape Town.

They rely on neighbours for food and clothes.

“Our neighbours have been treating us well. We would have died a long time ago if it wasn’t for them,” said Thabani Phewa, the eldest of the four children.

Thabani said things took a turn for the worse when their mother died after battling cancer.

“Mom was able to put food on the table for us. We were not well-off but we didn’t go to bed without food,” he said.

“It has been my duty to take care of my younger siblings. All we need is a proper house. We plead with the provincial government to help us get a house.”

Their father left them, Thabani said, adding “our aunts come to visit us but they don’t stay with us”.

The Phewa children nevertheless all attend school thanks to neighbours who have supported them.

“As the community we try to make sure that they’re safe and have food to eat.”

Ward councillor, Margaret Nkosi, requested the details of the Phewa family and promised to visit them.

She, however, said that child-headed families were among the people who would continue to be granted RDP houses.

Human Settlements spokesperson Kiru Naidoo told Scrolla.Africa she had asked for details of the family and said they will act swiftly.

“We will take this matter up as the department. Our duty is to respond as quickly as possible when such matters are brought to our attention,” said Naidoo.