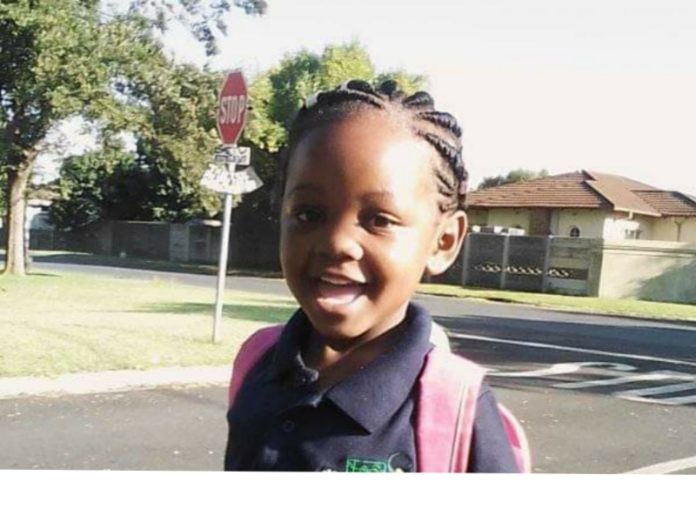 Six-year-old Amogelang Kgonyane counted down the days to going back to school. But instead of being taken to school on Monday morning, the little girl was murdered.

The child from Dunnottar, Springs didn’t get a chance to see her school friends after she was raped and killed, allegedly by a man who was trusted with her life.

Her mother Pakiso Kgonyane reportedly asked her stay-in boyfriend to accompany the grade 1 learner to school when she left for work early on Monday morning.

But then Pakiso, who works a few blocks away from home, received a call from the school asking about her daughter’s whereabouts.

She immediately rushed home. She found her boyfriend in the street, and he told her that Amogelang was sick and sleeping.

“When I arrived home, Amogelang was in bed covered in blankets. But she was not breathing. I immediately asked a neighbour to accompany us to the local clinic where she was certified dead,” she said.

The distraught mother said the doctors discovered that Amogelang’s body was covered in severe bruises and head injuries, suggesting that she was assaulted.

Pakiso’s boyfriend was interviewed by the doctors, but he could not explain how the child sustained the injuries while in his care.

After further medical examinations, it was detected that the child had also been sexually violated. Clinic staff called the police.

“My daughter was healthy and excited to be going back to school and now she is gone. I never suspected that the man I loved would harm my daughter, as he treated her like his own child,”  Pakiso said.

Duduza police spokesperson Seargant Harry Manaka confirmed that the suspect was arrested and faces charges of rape and murder.

“The suspect will appear before the Nigel Magistrate’s Court soon,” he said.