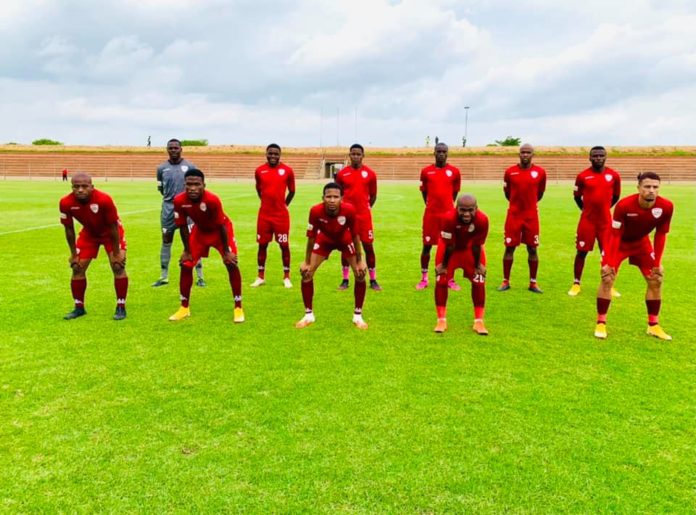 Sekhukhune United moved to the top of the log with a thumping 4-0 victory over Royal Am in their first game of the GladAfrica Championship on Saturday at Makhulong stadium in Tembisa.

Goals from Katlego Cwinyane, Thulane Ndlela and a brace from Nigerian forward Chibuike Ohizu were enough for Sekhukhune United to start their campaign with a bang, announcing its intentions of winning the league with the convincing victory.

They have acquired the services of players like Morgan Gould, Walter Musona, Prince Nxumalo and Jabulani Maluleke from PSL teams. The club has also acquired the experienced coach in Jonny Ferreira to guide the team to top flight football.

“It was a proper GladAfrica championship match. Any team could have scored in the first half but we went into the next gear in the second half,” Ferreira told Scrolla.Africa.

“We made a few positional changes at halftime. Once we broke the deadlock a second goal came soon after the flood gates opened. Royal AM is a strong team but we could have won the game 7-0. A fabulous performance.”

Meanwhile, Cape United, formerly known as Cape Umoya United, edged out TS Sporting 3-2 on Saturday at Kabokweni Stadium in Mpumalanga to record their first victory after the name change.

New striker Eleazar Rodgers opened his account on debut for Cape United While other goals were scored by Edson Khumalo and Sekela Sithole for the spirited ones. Former Kaizer Chiefs youth player Khotso Malope and Percyvell Nkabinde scored for Abantu Bemthetho.

Issa Sarr netted the only goal of the match for Uthongathi when they beat Free State Stars on Saturday afternoon at Goble Park Stadium. The Cane Cutters are levelled on points with log leaders Sekhukhune United and Cape United after the first round of games.

University of Pretoria will host Richards Bay in GladAfrica Championship, the only match today at Tuks Stadium in Pretoria. Kickoff is at 15h30.