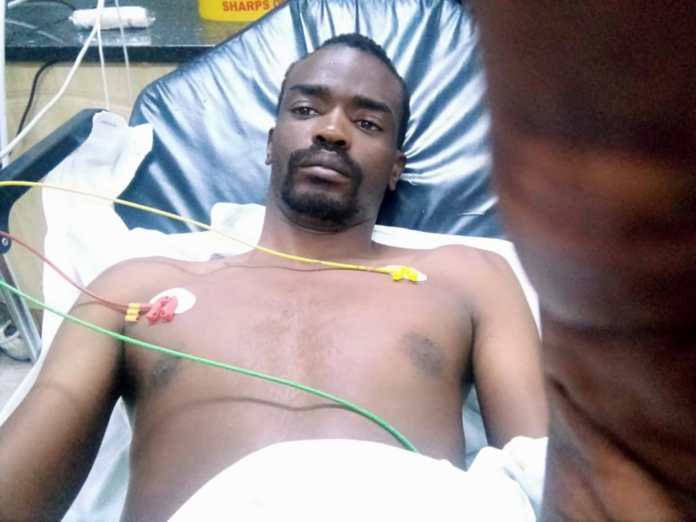 On the weekend, we reported how Collins Khosa was allegedly beaten to death by soldiers in Alexandra for drinking a beer.

But, as one of the other victims below says, Alex has been a “warzone”.

Our investigation has identified many other victims of lockdown brutality at the hands of the security forces in Alexandra.

·       On Thursday evening, he came out into his yard when he heard some noise. He saw a man dash across his yard, and over the fence to the next yard.

·       “While I was making sense to what was happening, a traffic police car pulled up at the pavement off my yard and five officers got out. There were three traffic officers, one SAPS member and one army.”

·       “They shouted at me to come to them. Before I explain to them that the person they were chasing has jumped the fence and went to the other yard, they shot at me”.

·       Three traffic police officers and one policeman then pointed guns at him. “I stood up frozen. I stopped breathing at one moment. I said nothing.”

·       It was then that the shot then rang out – while the cops were pointing guns at him, a soldier fired.

·       The gunshot echoed across the whole yard, he says, waking up his family. “I was shot on my leg with a rubber bullet.”

·       After shooting, one of the soldiers picked up the cartridge and left. “I posed no danger or harm to them. I was not holding any weapon and didn’t say anything to them.”

Tshegofatso is currently doing legal training, and works as a caretaker at an orphanage home. He says he will lay attempted murder charges.

Titus says he cannot sleep at night, after being shot at with five bullets.

·       When I return to get the remaining two plastic bags, a private car with soldiers inside shouted at me to go inside the house.

·       I ran into my room where my shocked wife and children were. I had blood all over my body and was in severe pain.

·       “After the army had left, the Avanza driver had also left with some of my groceries. I suffered double pain of losing my groceries and being shot at.”

Titus says every time he goes to bed, he hears the gunshots echoing in his head.

All he got from the local clinic was bandages and pain killers.

Walter Manyani, a hairdresser, says soldiers shot at him on March 31st while he tried to go to the outside toilet.

·       “When I put one leg outside the gate, I heard the armed men asking me where I was going. Before I answered, I heard a gunshot.

·       “I ran back into the house and realised that there was blood streaming down my leg.

·       “When I checked at the gate, the soldiers had left the rubber bullet cartridge.

·       “I cannot leave my bed. I don’t have the money to go to the police station to lay charges. Once I heal, I will lay criminal charges against the soldiers who shot at me.”

John Mathetja works for a cool drink company, which is categorised as an essential service.

He says when he arrived back home from work soldiers patrolling Alex shot at him with a rubber bullet.

·       “I saw people running from all directions. But because I didn’t do anything wrong, my mind was to get home and rest from a busy day I had at work.

·       He says he was shot on the palm of his hand, the bullet nearly ripping off his finger. “I work for a cool drink company. With my fingers injured, this will have a big impact on my family as I am the only one working providing for a family of eight.”

He says since the lockdown measures were put in place by the President, Alexandra has been a war zone. “There has been a chase of police/army and residents. Even local volunteers have been taking part in harassing the people.”

He shares a small room with his family. As much as he supports the lockdown campaign, Ozie says it’s hard for him to sit in his room the whole day. So he likes to sit outside his gate, by the street.

And that is where he was shot.

“The army driving in an unmarked vehicle pulled next to where I was seated with my friends and started shooting.

“There were several bullets shot and one hit me on the lower abdomen,” he says.

The widow of Collins Khosa, who she alleges was beaten to death by soldiers for drinking a beer in his yard.

Nomsa says she tried to save her husband, by arguing with his attackers.

They struck her too, she says.

“I couldn’t feel the pain of my injuries as my attention was to save my husband Collins Khosa. But he died under my watch.”

She has opened a murder case, and plans to add GBH charges too.

South African Defense Force spokesman Thabo Sello says those claiming they have been harassed or attacked by the army must lay official charges at their nearest police station. “We condemn any violent conduct by the army on the ground. The soldiers are deployed to protect and help the police to keep law and order in communities to the Covid19 pandemic,” he says.

Speaking about the death of Collins Khosa, Sello says the SADF will fully comply with the ongoing police investigation.