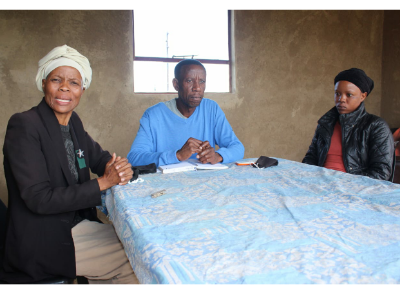 It’s taken three years, but Malebo Dikotla can now perform final rituals for her son’s soul to rest in peace.

She has been granted permission to perform the traditional ceremony in which a tree branch is used to collect the soul of a deceased who did not die of natural causes. Her infant baby is at the mortuary at Mankweng Hospital in Polokwane.

Malebo, from Mamadimo Park, outside Polokwane, lost her baby boy in March 2018 soon after giving birth.

For the past three years, she has battled to retrieve her son’s body from the mortuary.

The baby’s remains were kept at a government mortuary for a postmortem and DNA tests. At the time, the family suspected the baby’s death might have been caused by an injection Malebo received when she was admitted.

The postmortem results came back as inconclusive because the body was at an advanced state of decomposition.

Malebo said she was relieved now that her baby will finally rest in peace. She said hopefully she will also be at peace and not have nightmares.

Malebo’s father, David, said: “We will also be cleansed. The dark cloud will move away from my family. We believe the boy will rest in peace with the ancestors.”

David told Scrolla.Africa they were not able to attend funerals and other gatherings because the baby was not buried.

The family is busy arranging a funeral which will take place soon.

Malebo said she will be able to move on with her life.

“My life will go back to normal knowing I have buried my son and that I know where his grave is,” she said.

The body of the infant is still at the government mortuary in Polokwane and will be taken for burial once the funeral arrangements are finalised.