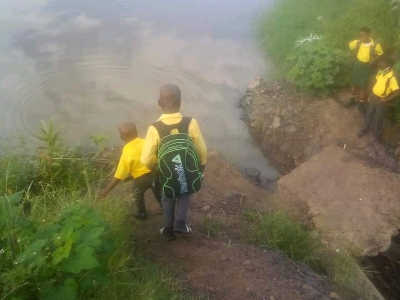 Hungry for education, children as young as five years old risk their lives by crossing the Umdloti River every day to go to school.

Distraught parents of children at the Emona Primary School in Tongaat, north of Durban, told Scrolla.Africa that the little ones have been risking their lives like this for years. But their pleas for a bridge have fallen on deaf ears.

Nozipho Dube, a parent of a five-year-old pupil, said they were asking the government to build a bridge for the sake of the kids.

“I fear one day our kids will end up drowning,” she said.

“When it rains, it is a potential death trap. It’s sad to see our children going through this.”

She said nothing hurts like watching her Grade 1 child stripping naked before crossing the river.

“It is just not right. I plead with the government to do something about this,” she said.

Thando Mkhize, the mother of a six-year-old Grade 2 child, added: “We fear that our kids will drown one day. We ask the government to intervene before any life is lost. My eyes fill with tears when we have to watch our children struggling to get across the river.”

“It’s painful to see young children crossing all by themselves. We try to help as many as possible who cross with our children, but sometimes there’s no one there to help them,” said Mkhize.

Equal Education head of research’s Hopolang Selebalo said: “We are disturbed and aggrieved that learners are still forced to walk long distances, as well as face dangerous terrain and severe weather conditions on their way to and from school.”

He said they have campaigned for five years for scholar transport for all learners walking far distances to get to school in the province.