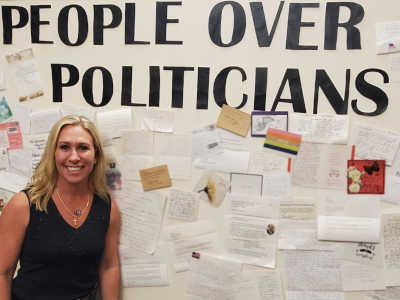 Britain’s Daily Mail newspaper battled to squeeze the unbelievable story into a single headline on Thursday.

“Embattled QAnon congresswoman Marjorie Taylor Greene openly cheated on her husband of 25 years with a polyamorous tantric sex guru and then moved on to another affair with the manager at her gym.”

Taylor Greene had been in the news recently for other reasons – her bizarre views.
She was a follower of QAnon, a far-right conspiracy theory alleging that a secret cabal of Satan-worshipping pedophiles who eat human flesh is running a global child sex-trafficking ring and plotted against former U.S. president Donald Trump while he was in office.

In her social media posts before she was elected last November she endorsed the killings of Democratic Party leaders. She also repeated anti-Muslim conspiracy theories and alleged that a Jewish radar which beamed from outer space was behind forest fires in California.

She was such a fan of former President Donald Trump that in an undated video, Taylor Greene is seen dragging a cardboard cutout of the former President on stage and then rubbing its crotch, whilst saying how great he is.

But if this is not enough to cause doubt in the minds of the followers of this conservative proponent of Christian values, the Daily Mail’s reporting just might.

The newspaper reported that though the 46-year-old Congresswomen has been married to husband Perry Greene since 1995 and shares three kids with him, she had affairs with at least two lovers she met at a local gym.

One was tantric sex guru Craig Ivey and the other fitness gym manager Justin Tway. Neither man denied the affairs.

‘I have no interest in talking about anything to do with that woman. Everything with her comes to no good,’ Tway, 42, said.

Tantric sex is a slow form of sex that can go on for hours without either partner achieving an orgasm.