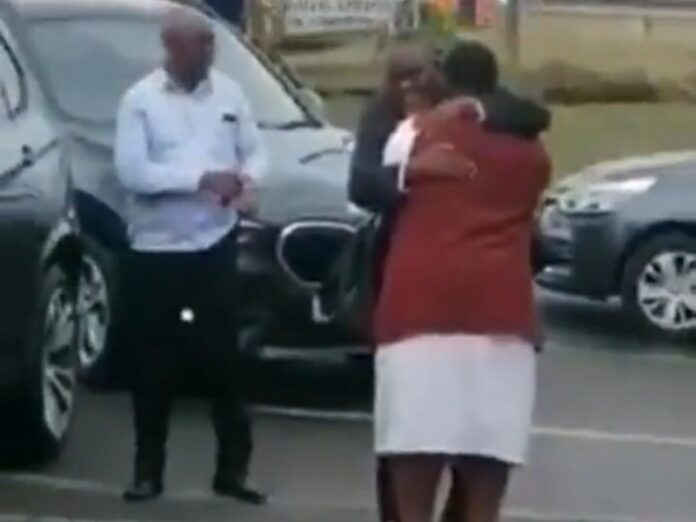 The newly-elected mayor of uMhlathuze Local Municipality surprised his wife with an entourage of his official blue light SUVs. She threw her arms around him and told him she thought it was a most romantic gesture.

But not everybody was impressed with IFP Mayor Nkonzoyakhe Donda’s public display of his love for his wife. He brought the town in Richards Bay to a standstill with sirens and hooters and a convoy of official BMW X5s and police vehicles.

Donda, a former primary school principal, visited his wife who is a matron at Phaphamani Clinic in eMpangeni.

His entourage brought the hospital to a standstill with workers, nurses, cleaners and security running around, ululating and jumping as they congratulated their colleague. Mrs Donda went to the vehicle with her husband in and hugged him.

Donda was elected after several squabbles that led to a fist fight between ANC and EFF councillors. He said he wanted to work hard to bring services to the people of uMhlathuze.

While many people thought the move was ever so romantic, many angry people on Twitter were furious and some even called for him to resign, accusing him of using municipal vehicles for his personal affairs.

Sir Charles on Twitter asked the most important question. “He has already forgotten the voters?” he asked.

Master Yak said people were sick and tired of this. “The IFP must stop this behaviour or their resurgence will be short lived,” he said.

Mike Barendse questioned the use of municipal vehicles for a personal visit to check out his wife.

“Why the convoy of blue lights? He is not a dictator,” said Mike.

Some others came out in support of Donda. Thahla kaNdayeni, forgetting for the moment that the mayor had enlisted a convoy of vehicles for personal use, said: “The support of a wife is very important, African son.”

Mzilikazi said: “He didn’t go to Cuba to celebrate with half-naked women. This is a family man.”

When the district was taken over by the ANC with then mayor Thembeka Mchunu.

The district was named after Zulu King Cetshwayo.