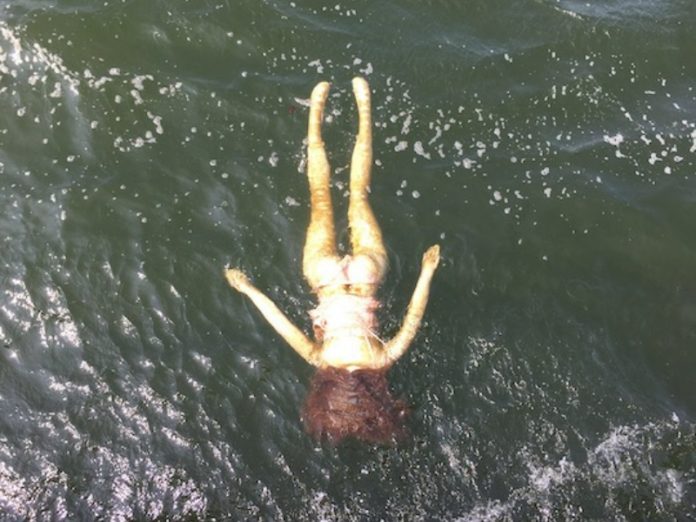 A naked woman was spotted lying face down and motionless in the sea and rescue services raced to the scene to save her.

Police, ambulances and the fire brigade heroically banded together to retrieve her. A coast guard member dove fearlessly into the water while medics waited on the shoreline, ready to perform emergency resuscitation on the patient.

But their dedication was deflated when they realised that the woman was in fact a discarded life-size sex doll, also known as Dutch wives.

The incident took place last week in the Japanese coastal city of Hachinohe. Youtuber Tanaka Natsuki happened to be filming when the Hachinohe rescue services showed up.

Until the moment the rubber doll was fished out of the water, Natsuki believed she was witnessing a real life rescue operation.

Natsuki later wrote on Twitter: “While I was filming for my fishing video I thought that a corpse had come floating by but it turned out to be a Dutch wife. Thankfully the ‘wife’ was safely rescued. Nice.”

Another who saw the rescue attempt said: ‘It’s funny for sure, but not fun for the emergency services. Dispose of your garbage properly, people!’

Sex dolls are a multi-million rand industry, and the most high-tech are robots programmed with personality traits, have a heartbeat and can apparently even climax.

However, while there are guidelines issued to correctly dispose of the dolls many are discarded recklessly.

Those who want to give their artificial lovers a proper send off can hire Rei Kato, a Japanese monk and actress, who performs funeral services for the retired dolls.

A ceremony is held in which the silicone soulmates are wrapped in burial garments, decorated with garlands and laid to rest in coffins.