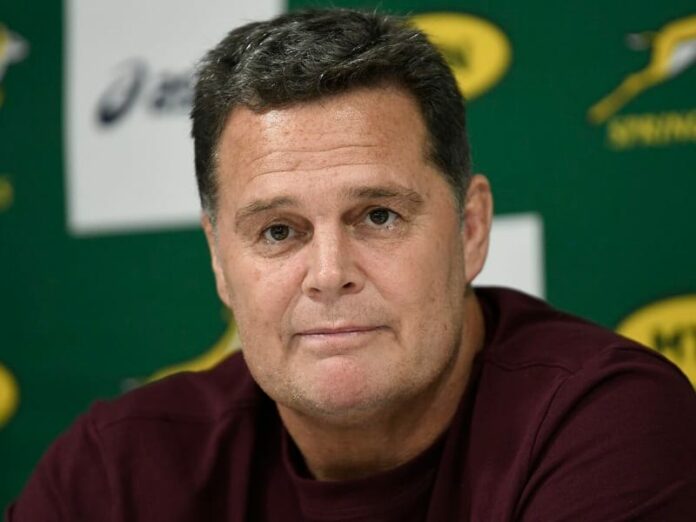 Everybody, even those who don’t really follow rugby, knows about the time Rassie Erasmus sat on the roof of the grandstand at the Free State Stadium waving instructions down to the players.

Johan Erasmus, known as Rassie, is weird and he’s a maverick. We know that. He does crazy things. Who can forget his hour-long video criticising Australian referee, Nick Berry?

The fact that he happened to be right didn’t make any difference to World Rugby. As we all know World Rugby’s only task is to protect themselves and their almighty stranglehold on rugby, but Rassie’s 12-month ban from attending matches seemed a little over the top to friend and foe alike.

His ban only ended in September – and here he is, once again pulling the lion’s tail.

He’s like a naughty child with a cricket ball. You hope so much that he’s going to change his behaviour that you are surprised when the ball comes flying through the window yet again.

It’s scary that some people are saying that losing matches is a part of Springbok strategy. We tried to believe that with Heyneke Meyer before the World Cup in 2015 and look where that got us. It’s also scary that there are even people who believe he should get fired. Well, that’s an opinion, hey.

Don’t ever forget that he led the Springboks to win the 2019 World Cup and he was masterful. He is a master strategist and a master team builder.

Erasmus is the lynch pin around which the Springbok team is built. Without him Nienaber and the rest of the team will be rudderless.

Is Rassie right to criticise and torment World Rugby the way he does?

It no longer matters. It is beyond right or wrong.

Somebody should devise a way to keep him in the locker room and away from social media. He needs to focus – without deviation – on leading the Springboks. He must make sure they stand on the winner’s podium at Stade de France in Paris after the Rugby World Cup final on 28 October 2023.