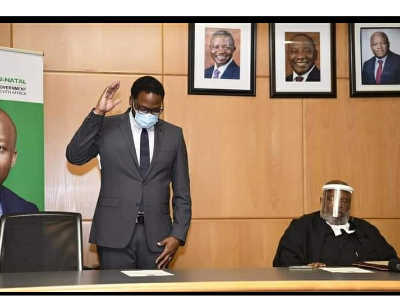 On Tuesday, Zikalala announced former MEC for Public Works and Human Settlements Peggy Nkonyeni as the new MEC for Transport.

Jomo Sibiya, the former chairperson of the education portfolio committee in the KZN legislature, takes over as the new MEC for Public Works and Human Settlements.

Sibiya is a known ally of President Cyril Ramaphosa in KZN and campaigned hard for him to be elected ANC president ahead of the 2017 elective conference, which he won.

Last week, Scrolla.Africa ran a story about Ntuli’s possible replacements, and Sibiya was among those touted to make a debut as an MEC.

He is the former leader of the ANC youth league in eThekwini.

Zikalala said the cabinet reshuffle was to ensure the stability of the ANC-run provincial government.

“We wish both MEC Nkonyeni and MEC Sibiya success in their respective responsibilities,” he said.

Internal factions were said to be the cause for the delay in filling the position.

KZN, which is influential in ANC internal politics, is divided between Ramaphosa and former president Jacob Zuma’s supporters.

However, Ramaphosa seems to be tightening his grip in KZN – a province Zuma once had total control over – as his allies were being deployed to strategic positions.

This may play out well for him ahead of the highly-anticipated ANC elective conference next year, should he decide to run for a second term as party president.

Gomba was fired amid the litany of controversies that followed her, including the R10 million Covid-19 scooter project.

Human settlements MEC Nonkubela Peters was moved to the department of rural development and agrarian reform, a position previously held by Meth.