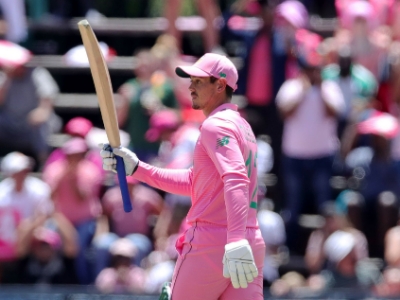 While the South African national men’s team are not doing well so far in their Pakistan tour, there is another burning issue that is boggling the minds of South African cricket lovers.

And that is who will take over the captaincy role?

Current captain Quinton de Kock, who serves in all three formats (Test series, T20 and ODI), is likely to be replaced as a Test captain when the National Selection Panel (NSP) assesses the tour.

Proteas head coach, Mark Boucher said the captaincy saga will be dealt with immediately when the team returns before Pakistan’s visit to South Africa in April.

“We have a bit of time now before our next Test series. We can sit down and probably make a good solid call on who will take over from him, [de Kock]” said Boucher.

Like every tour, the NSP sits down and vigorously analyses the tour as a whole which includes, among other things, team performance and the critical issue of who’s captain.

De Kock occupied the skipper role on an interim basis last year February following the abrupt stepping down of then captain Faf du Plessis, while Cricket South Africa (CSA) said they were looking for the right candidate for the role.

The 28-year-old wicket-keeper-batsman’s notable achievement in his short spell includes guiding the Proteas to a 2-0 series whitewash of Sri Lanka.

However, since then, things have gone sour for de Kock.

As things stand, nothing is going well for the Proteas in Pakistan, having lost the Test series 2-0 while trailing 1-nil in the first T20 games.

Among other names that are being thrown into the hat are: opening batsman Dean Elgar, Aiden Markram, Temba Bavuma and Rassie van der Dussen.