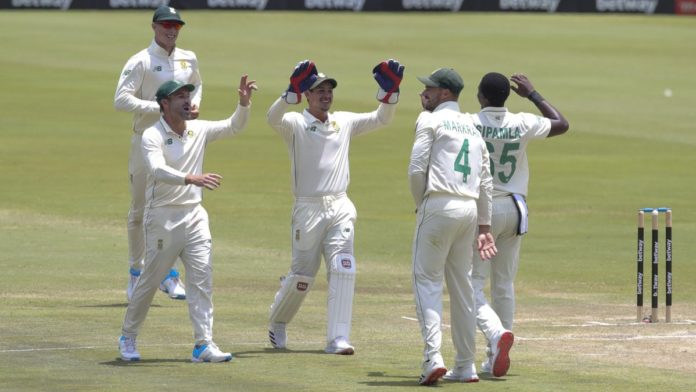 As the third day ends, the 1st cricket Test between the Proteas and Pakistan at The National Stadium in Karachi, is still in the balance.

After a disastrous start in the first innings by Pakistan which had them reeling at 27 for 4, they steadied the ship and finished their innings on 378. Coming to the pitch early in the day, South Africa seemed under the cosh, trailing Pakistan by 158 runs.

The Proteas lost opener Dean Elgar with the score on 48, but then Aidan Markram and Rassie van der Dussen put up a solid, though slow fight back on a wicket that has deteriorated since the match started.

While trailing by only one run, Van der Dussen survived a confident call for leg before wicket (lbw), but shortly before close of play he was caught with his score on 64 after facing 151 balls.

Faf du Plessis survived a very good appeal before he had scored, but his dismissal for 10 runs three overs from the end of play, along with Markram’s dismissal for 74 off 225 balls did not help South Africa’s cause at all.

By the end of play, South Africa had lost three wickets in quick succession and were effectively at 29 for 4.

Still, in true Test match fashion, the game is still available for both teams and South Africa will hope to bat all day on day four. Pakistan are certainly in the best position, but the pitch, which has been deteriorating since the start of the match, now definitely favours the bowlers.