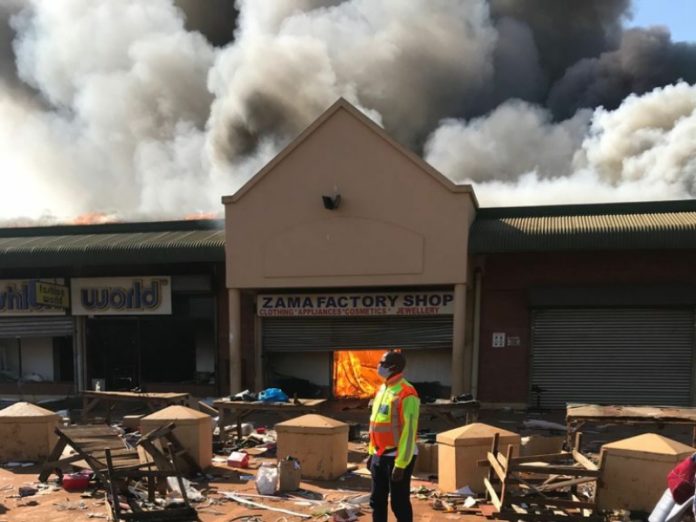 The members of the South African Police Service in Nongoma, North of KwaZulu-Natal had to watch from their state vehicles while looters spread chaos in the poverty stricken rural town.

The police officers were not equipped with bullets, guns and teargas, so were powerless to stop the looters.

These details were revealed during the community meeting with the Cluster Commander, which was held over the weekend in the aftermath of the former president Jacob Zuma’s arrest.

On Friday Nongoma communities came together to clean their town following week-long looting.

Nongoma was severely damaged over the course of the week and its businesses have been so ravaged that only a single Spar supermarket and two filling stations remain for people to purchase basic needs.

In attendance at the meeting was the mayor of Nongoma, Albert Mncwango, who told another attendee, Major General Thulani Gonya, that  the community made several calls to the local police station, begging their assistance to prevent the looting.

“When protestors were approaching the town, we called the police asking for backup. Instead I was told that the Nongoma SAPS doesn’t have manpower to face protestors because there’s no guns, rubber bullets and other resources to deal with protestors. Even those few police who came to town. They were sitting in their state cars watching people breaking some shops which were Liquor shops and ATMs,” said Mncwango.

He said the situation became tense and they had to call police from neighbouring towns such as ULundi, which is almost an hour’s drive from Nongoma, to come and assist.

Community representatives said the people who looted and burnt Nongoma were from other towns such as Newcastle, Pongolo, Vryheid and ULundi.

They were traced by the number plates of their vehicles, many of which have since been impounded after they were caught with the looted goods.

During the meeting, it was alleged that business people and even some school pupils were involved in the looting of Nongoma.

Major General Gonya was shocked by these allegations and vowed to leave no stone unturned in the search to find out why the Nongoma police failed to protect and arrest the looters.