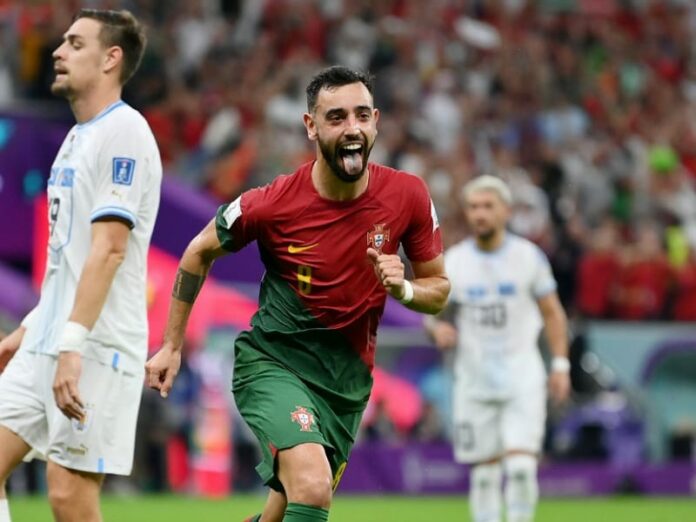 Bruno Fernandes and his Portuguese compatriots delivered the goods to beat Uruguay 2-0 at the Lusail Stadium on Monday night football in the Fifa World Cup.

There was controversy within the goals but few will argue that Portugal were the better team on the night, as Fernando Santos’ side booked their place in the knockout stages.

The South Americans came closest to scoring in the first half through Tottenham Hotspur’s Rodrigo Bentancur. However, the Europeans kept more of the ball and looked better creatively in the second 45.

The breakthrough came from Portugal’s first attempt on target less than ten minutes into the second half. It remains up for debate whether it was Fernandes or Cristiano Ronaldo who got the touch, but both players will only care that it secured their progress.

The curling cross from the Manchester United man came in and former United man Ronaldo seemed to claim the faintest of touches. Fernandes was eventually awarded the goal after

Ronaldo celebrated it; and in the final moments of the game it would be a brace for Bruno!

It was another much-debated moment, as a penalty was awarded to Portugal; and with Ronaldo being substituted, Fernandes slotted home to seal the win for his side.

Uruguay will need a result against Ghana in their third game on Friday if they are to have any chance of staying in Qatar beyond the group stages. For Portugal, the game against Korea Republic is all about cementing top spot with a last 16 place already confirmed.