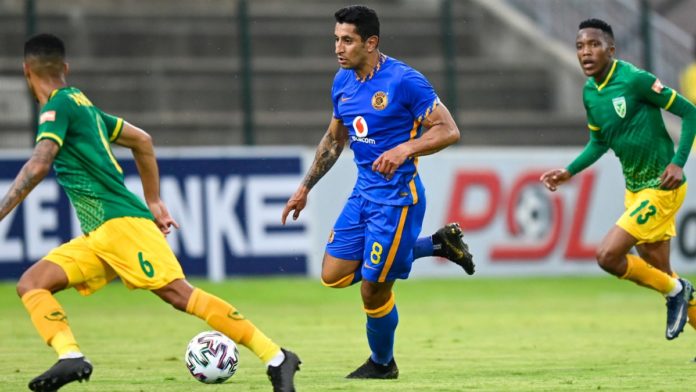 Kaizer Chiefs continue to leak goals as their defensive woes go from bad to worse in the DSTV Premiership.

The Chiefs have now conceded five goals in their four league matches after they were held to a two all draw by Lamontville Golden Arrows on Saturday.

Chiefs coach Gavin Hunt once again expressed his disappointment by the way his lads defended at Sugar Ray Xulu Stadium in Durban.

“Defending has been an issue for us.

“From where we were a couple of weeks ago and where we are now I’m really disappointed.

“But it is a good sign to be disappointed because it means we are expecting more,” said Hunt.

Chiefs were by far the better side than the hosts and Amakhosi looked sharper going forward with Lebohang Manyama, Khama Billiat and Leonardo Castro leading from the front.

The trio had a number of chances – especially in the first stanza – to put the visitors ahead.

The first half ended in a stalemate but the second half was a different ball game altogether.

Second stanza started with drama when Abafana Bes’thende was awarded a controversial penalty just two minutes into the half.

Chiefs would feel hard done by referee Olani Kwinda who blew the whistle on Willard Katsande judging him to have fouled Arrows Zolani Nkombelo in the box.

Thanks to the big screen and replays it showed that Katsande played the ball and not the man.

From that foul Arrows took the lead with Siboniso Conco scoring the penalty kick.

Amakhosi quickly recovered and it took them nine minutes to find an equaliser that came from Castro’s header.

Castro was the recipient when Billiat squared the ball to him to finish his brace eight minutes later.

Arrows worked their magic and managed to break the Chiefs defence that was led by Daniel Cardoso and Siyabonga Ngezana.

Arrows’ equaliser was a beauty and Chiefs captain and goalkeeper Itumeleng Khune was beaten.

Nduduzo Sibiya came from the bench to score a scorcher outside of the big box.

The results left Chiefs in ninth place with five points after winning just one match. They lost one and drew two.