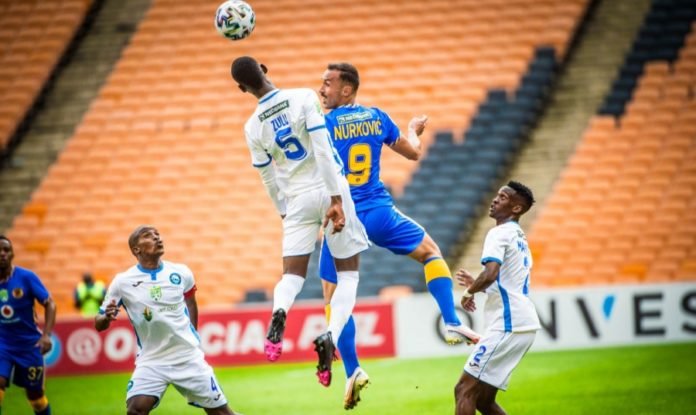 Wasteful Kaizer Chiefs were booted out of the Nedbank Cup in the first round on Sunday. Energetic Richards Bay managed a famous victory over Chiefs beating them 2-1 at FNB Stadium.

Richards Bay, who play in the GladAfrica Championship, are a second tier club who have never won a major trophy in their four years of existence.

Amakhosi have played teams from the lower division 26 times and it was their sixth defeat, their last loss being two years ago when they lost the final to TS Galaxy who were playing in the First Division at the time.

Chiefs had numerous chances to score and win the game but it was the KwaZulu-Natal outfit who took the lead in their first real attack.

Thabani Dube found the back of the net in the 29th minute after sloppy Chiefs defense.

Amakhosi had to go one man short for them to get back their rhythm.

Siphosakhe Ntiya-Ntiya got his marching orders after getting two yellow cards that automatically earned him a red card. Nine minutes after being sent off, Leonard Castro scored an equaliser coming off the bench.

Substitute striker Siyabonga Vilane was the one to pile the misery on Amakhosi by scoring a winner for the visitors in the referee’s added time. Natal Rich Boys’ coach Simo Dladla said Chiefs played right into their hands.

Disappointed Chiefs coach Gavin Hunt couldn’t hold back his disappointment and said: “We were wasteful. We got to better, work a little bit harder. We need to turn the corner somehow.”

“I’ve never lost to a first division side in 27 years. I warned them about this team,” said Hunt.

Richards Bay coach Simo Dladla said: “It was a tough one for us. But we forced them to think hard and our plan worked. Chiefs is a big team and most of my boys idolize their players. But I had to make them understand how big this game was for us and we needed to win it,” said Dladla.

This defeat for Chiefs means they might have to go another season without a trophy and it could make it seven seasons in a row without silverware should they fail to lift the DStv Premiership.