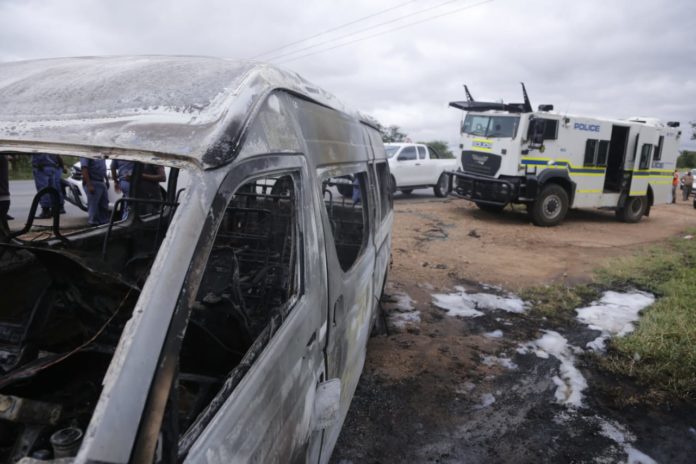 Commuters from Moletjie outside Polokwane in Limpopo are lucky to have escaped  unharmed after the Quantum taxi they were travelling in was attacked and burnt on the R521 near Polokwane on Friday morning.

“The men came from nowhere and forced our taxi to stop. We were screaming and they let us out before attacking the driver and burned his taxi,” said commuter Sara Ledwaba who said the attackers also fired guns.

A car belonging to one of the taxi bosses from Moletjie was burnt during the day on Thursday while two other taxis were set alight during the night.

“Our permits allow us to ferry commuters to Mall of the North and we really don’t know why drivers from Seshego Association are unhappy about that. They severely beat four of our drivers,” Kgasago said.

“We are pleading with the Seshego Taxi Association bosses to meet with us to sort out this mess.”

Moshita Lekganyane, spokesman for Seshego Polokwane Association admitted there was a serious problem among the three taxi associations.

He said Mankweng and Moletjie taxi associations have opened an illegal rank at the corner of Jorrisson and Schoeman Streets which is causing problems.

“We are aware of the inconvenience caused to our commuters and we are sorry about that,” he said.

She said her department will meet with the provincial and Capricorn District Taxi Council’s conflict resolution team.

She said they are aiming to meet with the affected associations after meeting with Santaco.

Brigadier Motlafela Mojapelo of the Limpopo police confirmed that cases of malicious damage to property, attempted murder, assault and robbery have been opened in Polokwane, Seshego and Westenburg police stations and no arrests have been made.