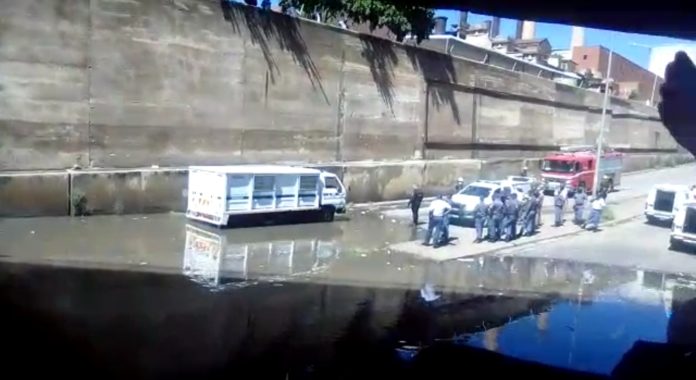 A police van carrying nine inmates to court in Mangaung got stuck in water under a bridge for almost two hours.

Some shoppers were scared and shocked. Others said they were expecting to see the suspects break out and swim for their freedom. One bystander hoped he would make some extra cash by helping the police chase!

The police immediately called for a backup and soon more police were dispatched to Fort Street downtown in Bloemfontein to help guard the prisoners from escaping.

An eyewitness, Palesa Selamela, said she was walking to town when she saw the stuck police vehicle in the water.

“This road always has the water stuck here and I have always seen cars breaking down in the middle of the water. But today I saw the police van with suspects inside and they were all screaming to be allowed to get out.

“But we know they were probably thinking of escaping the moment the doors were opened. I was scared because I don’t know what they would have done to see their freedom.”

Thabang Tsotetsi said he was hoping to see them escape and watch the police take up the chase.

He said: “I would have helped to chase and hopefully the SAPS would have given me some money. But he said that “unfortunately” the fire truck was called, the vehicle pulled out and all the suspects were taken by other police vans.

“Some even shouted and said we were cowards by not helping them escape,” Thabang said.