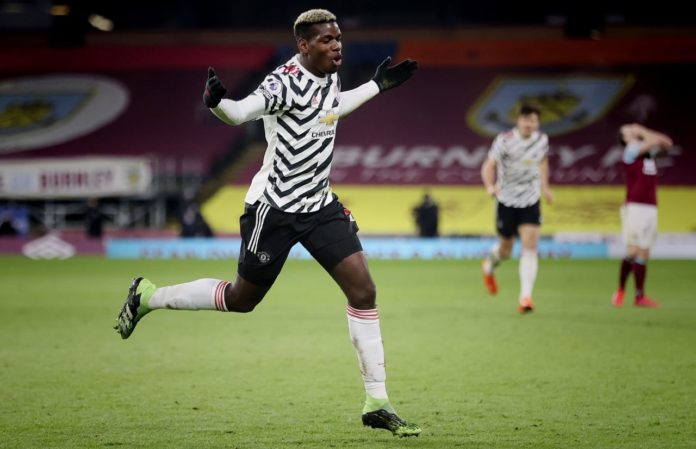 Midfielder Paul Pogba set aside his differences with his club Manchester United in spectacular fashion on Tuesday by scoring the winning goal away against Burnley.

The Red Devils are now three points clear of Liverpool in the English Premier League with 36 points after 17 matches.

United are on top for the first time since they last won the title in 2012/13 and could move six points clear with a victory against Liverpool at Anfield on Sunday.

In early December, United manager Ole Gunnar Solskjaer said Pogba was unhappy as he can’t express himself like he wants to.

Pogba, who could still leave the club for Juventus in this January transfer window, told BBC Sport that the win against Burnley was a huge morale booster.

United are now unbeaten in 15 Premier League away matches, winning 12 of them, with their last defeat on the road coming at Anfield a year ago. Could history repeat itself at Anfield this Sunday?

“It will be a beautiful game for everyone,” said Pogba.

“It’s a big game. We have to keep calm. Now it is the big moment. We will see what is going to happen,” said Pogba.

After the three-point win on Tuesday Solskjaer said his boys were hungry.

“They want to get better and that’s a test of character and a test of quality,” said Solskjaer on the club’s Twitter page ahead of their tough assignment over the weekend.

United are in incredible form. In their last five matches they have collected 13 points out of a possible 15.

On the other hand, things have not gone Liverpool’s way. In their last five matches they collected eight points out of a possible 15 and they lost their last match to Southampton a week ago.