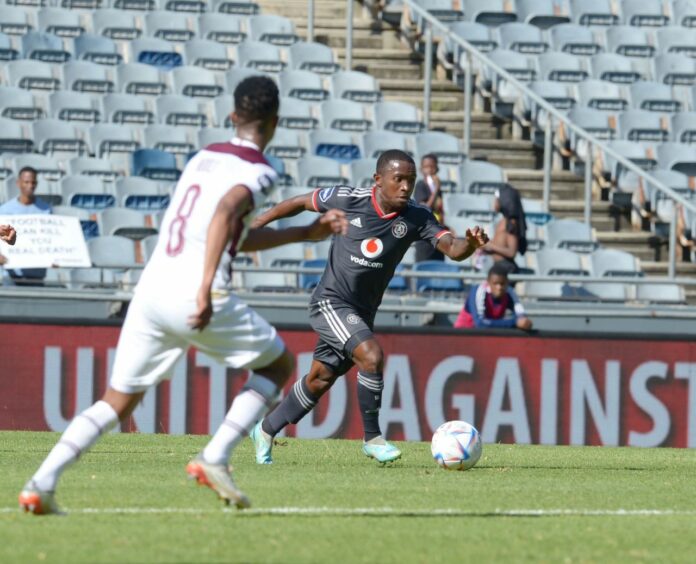 Orlando Pirates shot to fourth place in the Premier Soccer League table after recording their biggest victory of the season, thrashing Stellenbosch 4-1 at Orlando Stadium on Sunday.

Thabang Monare, Innocent Maela, Kermit Erasmus and Ndabayithethwa Ndlondlo each scored their first PSL goals of the season for Pirates as they helped their team climb up from eighth spot.

For Stellenbosch, they remained on position 14 and extended their winless run to eight matches.

Pirates did not take time to go ahead after Monare rose high to head in a free kick from Monnapule Saleng.

Stellenbosch tried to respond but Nkosinathi Sibisi and Tapelo Xoki were quick to combine and shut down Antonio van Wyk who had been fed by captain Dean van Rooyen.

The visitors’ efforts of hitting back were then frustrated when goalkeeper Sage Stephens came off his line to the edge of the box and missed his punch. The cross from Xoki ended up falling into the path of Maela who comfortably fired home.

Now, having doubled their advantage, the Buccaneers were not stopping. But Bandile Shandu was denied by the woodwork just after the half-hour mark.

Stephens then made amends for his earlier blunder by brilliantly denying Maela who had shot from an acute angle.

A well-positioned Saleng almost beat the halftime whistle but his chest-and-shoot went just over the bar.

The Buccaneers picked up from where they had left off in the first half. Four minutes after the restart, Erasmus turned Athenkosi Mcaba but shot over the bar.

Finally, Erasmus broke his league goal duck after coming to the end of a Saleng cross to fire past Stephens in what was his last touch of the match.

Shortly after, Ndlondlo’s screamer from outside the box gave Stephens no chance as he added on to another league goal he had scored for Marumo Gallants earlier this season.

Pirates were cruising without much challenge from their opponents and substitute Terrence Dzvukamanja came close but his effort was blocked by a busy Stephens.

But after that opportunity, the hosts appeared relaxed and allowed Stellenbosch to get their goal through 19-year-old Boji’s first-ever career goal.