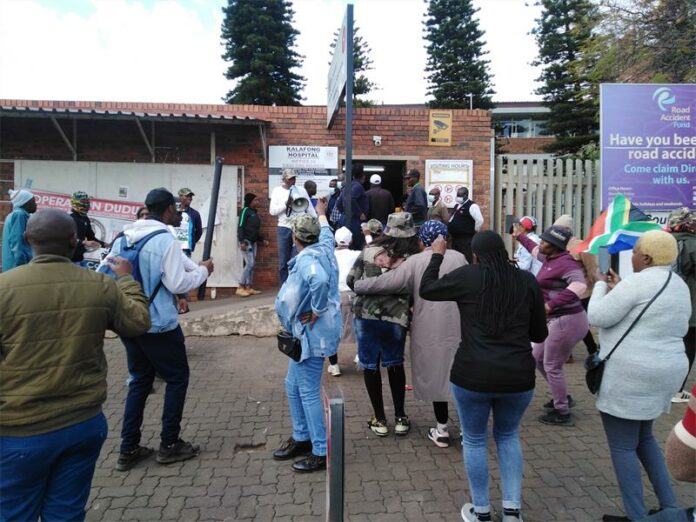 Earlier this month, the anti-immigrant group began harassing patients of Kalafong Hospital in Atteridgeville, who they believed to be foreign.

They expanded their operation on Wednesday, screening the accent and appearance of patients outside Tembisa and Chris Hani Baragwanath hospitals.

Their position is that as there is only a limited supply of healthcare in South Africa, priority should be given to South Africans. Foreigners should be forcibly prevented from receiving it.

The exact legal status of foreigners to be targeted, however, is unclear. Some members want to prevent only illegal foreign nationals from getting treatment. Others want to stop all foreigners.

On Wednesday a tense standoff ensued at Kalafong Hospital between Operation Dudula and EFF members, who organised a counter-protest.

Tensions apparently boiled over at one point, with Operation Dudula members claiming that they were injured in a physical altercation with counter-protesters.

However, for most of the day the two groups attacked each other using only words, singing defiant struggle songs at one another.

But the police didn’t take chances. Unlike the past weeks when a single police van would monitor the situation at the hospital, there was increased police visibility on Wednesday, with more police officers and vehicles sent to monitor the hostile atmosphere.

On Friday last week, the Gauteng Health Department obtained a court interdict preventing Operation Dudula from threatening patients or employees at the hospital. Its members have ignored the interdict and have stepped up their demonstrations outside Kalafong and other hospitals.

On Wednesday, while clashes ensued at Kalafong Hospital, a small group of Operation Dudula members went to Tembisa Hospital in the city of Ekurhuleni, while another group went to Soweto to protest against foreign patients admitted to Chris Hani Baragwanath Academic Africa’s biggest hospital.

The group went to the Bara taxi rank just opposite the hospital and allegedly forced vendors to show their right arm to prove that they are South Africans. They falsely believe that vaccination marks on the right arm is an indicator of whether someone is South African.

Operation Dudula’s Johannesburg chairperson Siphiwe Shabangu said they will continue to picket outside all health facilities in Johannesburg until their demands are met.