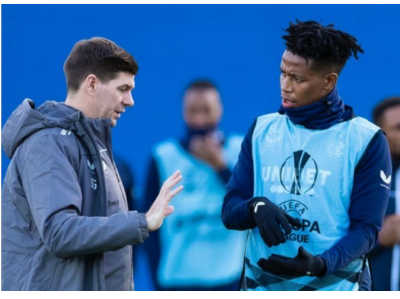 One night of fun has cost Bafana Bafana midfielder Bongani “Ben 10” Zungu the chance of a lifetime.

Zungu could have secured a permanent move to Scottish giants Glasgow Rangers, but that was before he and four teammates were fined by the police for breaching Covid-19 rules.

Now Rangers coach Steven Gerrard has removed them from the first team squad.

When Gerrard was asked if Zungu’s chances of a permanent deal had disappeared after the incident, the former Liverpool captain said: “I think that would be fair to say, yes.

“We’ll move forward with the players who have remained professional and want to be part of a successful team,” he said.

Zungu, the Duduza-born midfielder, joined Rangers on loan from French club Amiens at the beginning of the season. He has struggled to make an impact.

Zungu, along with four other players, attended a house party last weekend in defiance of Scotland’s strict lockdown regulations. A police spokesperson was quoted on BBC.com as saying: “We received a report of a gathering at a property in Hayburn Lane‚ Glasgow‚ around 1.10am on Sunday‚ 14 February.”

The players are still in self-isolation. They were left behind from a trip to Belgium where Rangers beat Antwerp in the first leg of the UEFA Europa League.

On Sunday they missed out on Rangers’ win over Dundee United and they are likely to also miss the Europa League second leg at home against Antwerp on Thursday.

Lack of discipline is not something new to South African players playing abroad. In the past the likes of Mbulelo “OJ” Mabizela and Jabu “Pule” Mahlangu sacrificed their careers abroad for nights of fun.