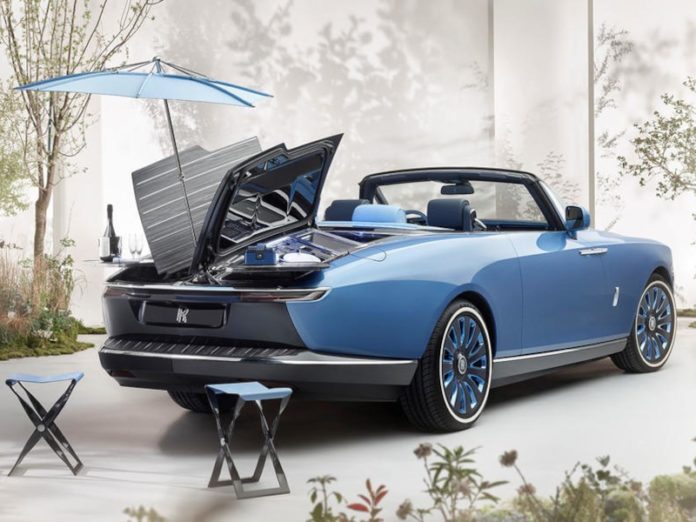 A mystery multi-millionaire couple have commissioned a £20 million (R390m) bespoke Rolls-Royce, complete with a champagne cooler and a telescopic parasol.

The near-six metre long Boat Tail has taken four years of “mind-boggling attention to detail” to design, resulting in the most expensive new car in history.

The baby blue luxury car was custom built from scratch for the unknown pair, who were described in the unveiling as a “wealthy and flamboyant” couple.

They reportedly share a love of chilled champagne and alfresco meals, and are keen collectors of watches, pens and fine wines.

So the unique convertible was designed with this in mind.

On the left side, a refrigerator storing two bottles opens out. The car will be delivered stowing two bottles of the owners’ favourite champagne, which can cost over R1 million a bottle.

On the right side, rotating cocktail tables emerge, as well as “temperature controlled food warmers.”

And across the middle, a telescopic arm unfolds to reveal a sun shade parasol. It emerges automatically “in anticipation of fine weather.”

To top it off, on the dashboard of the car is a built-in panel for the owners wristwatches, a pair of ridiculously expensive timepieces which were made to compliment the car.

And this just scratches the surface of the detail the nautical-inspired car was crafted with.

But some on social media were less than impressed by the finished article.

One user wrote, “If I had 20 million, a picnic in a car park is not a luxury I would partake in.”

Another, feeling a sense of pride for their own modest motor, wrote, “I think I will stick with my 2005 Nissan Primera.”