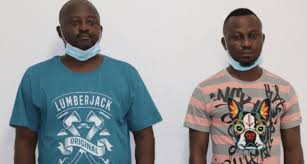 South Africans have been watching in horror as Covid thieves rip off relief and PPE funds.

But two Nigerians take the trophy for the most inventive PPE scam.

The two are accused of cloning an entire corporate website from which they sold Covid-19 PPE for millions of Euros.

In one instance they sold PPE equipment via the website to the German State of North Rhine-Westphalia by pretending to be representatives of the company.

They received advance payments of R80-million.

Mba said that “disturbed by the non-arrival of the PPEs, Mr Freiherr Fredrick Von Hahn (the representative of the German state) eventually visited the corporate office of ILBN Holdings in Holland to inquire reasons for the delay in supplying the items only to find out that the company never did business with him and that the transaction was a scam.”

An investigation revealed that along with accomplices in the Netherlands, the men were specialists in cybercrime, identity theft, cyber-stalking and cloning of websites.

The men were tracked down and arrested and are now in custody.