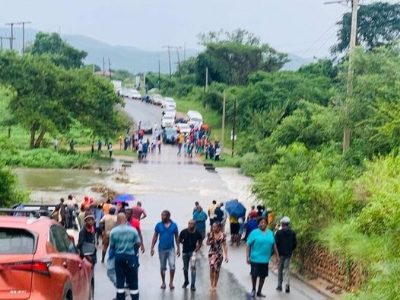 The Department of Traditional Affairs (Cogta) in Mpumalanga is extremely worried about the risks taken by residents who are crossing bridges submerged under water.

However, Nkomazi Municipality residents continue to risk their lives by crossing the partly collapsed bridge that connects Driekoppies and Schoemansdal.

Eight people have been confirmed dead after drowning, while five are reported missing and some bodies are yet to be recovered due to the devastation of Cyclone Eloise.

Mavuka Sibahle, a resident in Schoemansdal, told Scrolla.Africa the bridge is 400m from Nkomazi Nkandla, where community developments are discussed.

“We are concerned about the way forward regarding the damage suffered from the floods and we need to attend these Nkandla meetings to stay in the loop,” said Sibahle.

“We will continue crossing over the submerged bridge to make sure we are up to date with projects.”

Other residents said their livelihood depends on crossing the bridge every day to go to work.

In Dirkiesdorp, Mkhondo, three men were swept away while crossing a flooded river on horseback. One of the men is still reported missing while the others were lucky to be washed ashore.

Two children in the same area were also reported to have drowned, after slipping into a flooded rubbish dump where they were playing.

Some missing people from the Masoyi, KaNyamazane and Dirkiesdorp areas, who were last seen crossing flooded rivers, are presumed to have drowned.

“Such disregard is a disaster waiting to happen and we caution those crossing the submerged bridge to stop that behaviour,” he said.