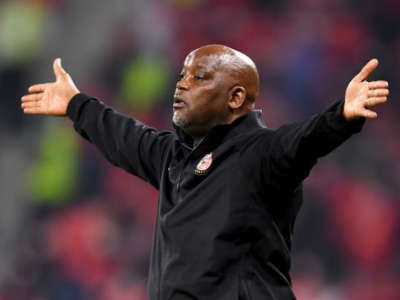 Fresh from their Fifa Club World Cup campaign, Al Ahly began their Caf Champions League title defence by handing out a 3-0 thrashing to Al-Merrikh of Sudan.

When Mosimane took over the Red Devils’ hot seat in October, the club was already in the final stages of the competition which they eventually won. In his first match, Mosimane beat Moroccans Wydad Casablanca in the semi-finals and went on to defeat Zamalek 2-1 in the Egyptian final.

On Tuesday night, three second half goals from Mohamed Magdy, Mahmoud Kahraba and Walter Bwalya gave Mosimane the start he was looking for in Group A. The result has taken Ahly top of the table, tied with Tanzanian outfit Simba.

Simba won their opening match 1-0 against As Vita Club of Democratic Republic of Congo last Friday.

Mosimane’s stay at Ahly continues to be difficult as rival coaches and former players constantly hit out at him. Recently former Ahly player Diaa El-Sayed took a jab at Mosimane for saying he wanted to reinforce his frontline. He also accused the club bosses of protecting him.

“The board took the decision to hire Mosimane because they didn’t have time. Al Ahly protects him from any criticism and this is normal at the club,” El-Sayed told ON Time Sports.

“What Mosimane did when he came out publicly and asked for signings before sitting with the management was wrong. These things have to be done behind closed doors.”

Al-Merreikh coach Nasreddine Nabi also hit out at Mosimane before the 3-0 beating on Tuesday.

“I was waiting for a better performance from Al Ahly in the Fifa World Cup, but the coach has the right to choose the method he deems best suited to Al Ahly,” said Nabi.

Mosimane’s next Champions League match is away at Simba next Tuesday while Al-Merreikh will host Vita Club on the same day.