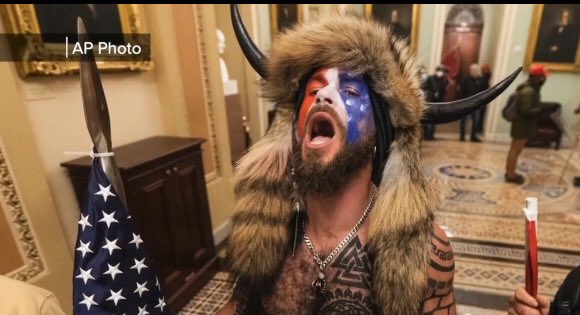 Tough guy Jacob Chansley is behind bars and he doesn’t like the food.

Chansley is the fearsome looking man with the bare chest, the painted face and the horned helmet carrying a six foot spear seen in many pictures of the mob ransacking the Capitol in Washington DC last week.

Chansley calls himself a shaman – a North American sangoma – for the conspiracy cult calling itself QAnon.

During the melee, he was photographed wielding his spear and standing at the chair of Vice President Mike Pence inside the US Senate Chamber.

Chansley was arrested on Friday and appeared in court in Arizona on Monday.

His mother told the court that the tough guy hadn’t eaten since Friday because the prison authorities would not serve him organic food.

He was granted his wish. Judge Deborah Fine ordered that he should receive a strictly organic diet on “religious grounds”.

Wouldn’t want to hurt the poor guy’s feelings now, would we?