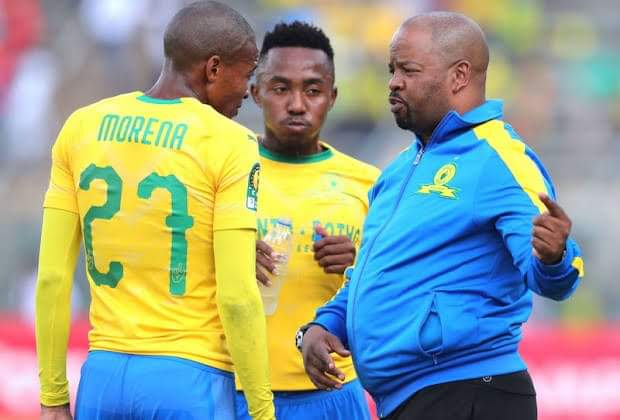 Coach Manqoba Mngqithi has warned Mamelodi Sundowns players about becoming complacent when they take on Maritzburg United in the DStv Premiership match on Saturday at Harry Gwala Stadium at 20:15.

United fired Eric Tinkler a fortnight ago due to poor results and appointed German Ernst Middendorp as head coach.

The team are yet to record a victory in the premiership this season and are rooted to the bottom of the log. They are looking for their first win but it will be a struggle against the on-form Sundowns.

The Brazillians come into the match currently on top of the log following back-to-back home victories over Amazulu and Stellenbosch. They have won four and drawn one in their five league matches. Themba Zwane has been the talisman for Downs with an average of one goal per match.

Mngqithi believes Maritzburg United can’t just turn into a bad team overnight after causing problems for many teams last season. And the appointment of Ernst Middendorp will make Maritzburg a difficult team to beat.

“I have a lot of respect for Ernst Middendorp. He might not have achieved a lot but believe me he is a clever technician, that will make Maritzburg a difficult team to play against,” said Mngqithi.

“They still have influential players from last season with De Reuk at the back, and Keagan Buchanan, Kutumela and Ali Meza upfront. We have to dig deep if we want to win.”

He said the bottom team often troubles the team at the top.

“We don’t want to be an example of that. We will give it our level best and put up a good fight,” he said.

In Saturday’s other fixture, Tshakhuma Tsha Madzivhandila will host Amazulu FC at Thohoyandou Stadium at 18:h00.