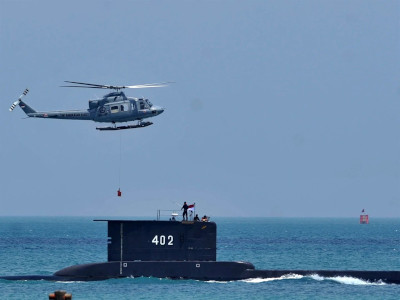 Officials now say there is no hope that the 53 crew members of the missing Indonesian submarine will be recovered alive.

Rescue teams found items believed to have come from the missing vessel on Saturday, the same day its oxygen supply would have run out.

“With the authentic evidence we found, believed to be from the submarine, we have now moved from the ‘sub miss’ phase to ‘sub sunk’,” Margono told a press conference on the island of Bali where the items were displayed.

Contact was lost with the KRI Nanggala 402 shortly after it prepared to conduct an underwater torpedo drill on Wednesday.

A large-scale international search was launched after it was declared missing, with planes and warships from America, Singapore, Australia and Malaysia joining the rescue mission.

The Indonesian Defense ministry said that there are 49 crew members, three gunners and a commander onboard the vessel, which is reportedly 19 more people than the submarine was built to carry.

Frank Owen, secretary of the Submarine Institute of Australia, told the BBC, “This has all the makings of a major tragedy, made all the worse by the fact it had an extra 19 people on board.”