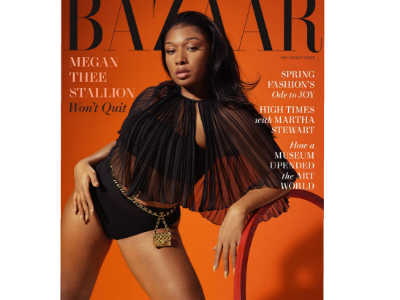 The two cover images of Meghan, 26, have drawn criticism online for the pictures’ “questionable lighting” and because the rapper’s “dynamism is downplayed”, writes the LA Times.

Many commentators on social media argue that it has become a pattern for fashion magazines to fail to positively represent black women in their photo shoots.

“Photographer didn’t even know how to capture Megan’s skin correctly.. in any of the pics,” read one Instagram comment under the first cover, which pictures Megan dressed in a fancy black Chanel cape, top, briefs, a belt and Bulgari High Jewellery earrings.

Others have argued that these critics are making a mountain out of a molehill, and if there’s anything to take from this debate, it’s that almost everyone now knows a thing or two about photography.

Indeed the cover’s photographer, Collier Schorr, said that Megan Thee Stallion collaborated with her on the pictures.

“A most remarkable experience making pictures with Megan Thee Stallion,” Schorr wrote, “who discussed each picture and edited afterwards with me … total collaboration as it should be to make together new images of her at this moment in her life.”

Also, the shoot was styled by Samira Nasr, the magazine’s first black editor-in-chief.