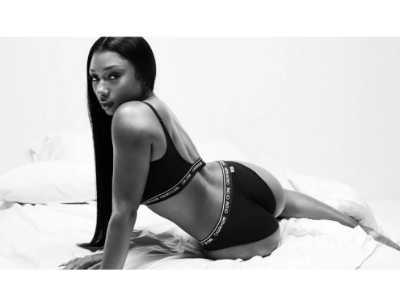 Megan has really taken her self-styled “hot girl” persona to heart as she stars in Calvin Klein’s latest ad campaign.

The sizzling pictures were taken by Mario Sorrenti and have set social media alight since dropping on Wednesday.

The 26-year old rapper was photographed modelling a white bra and thong with the brand’s classic logo trim, along with a pair of pushed-down, unbuttoned jeans.

The pictures exhibit Calvin Klein’s trademark minimalist style in black and white. Before Megan, such superstars as supermodel Gigi Hadid, Justin Bieber and Calvin Harris had trod this prestigious path.