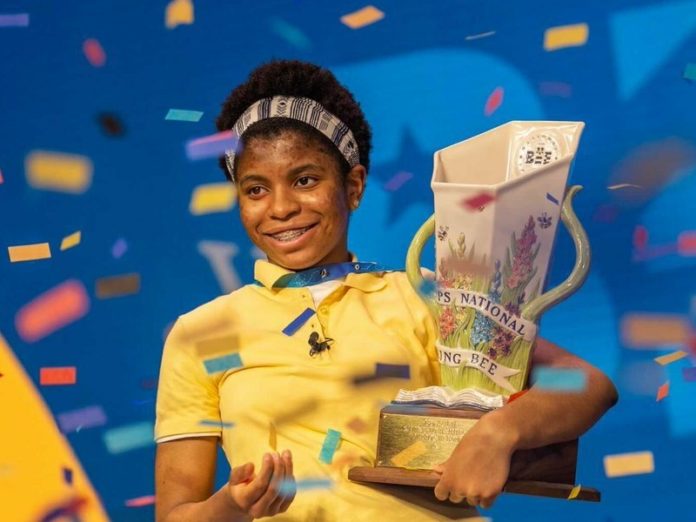 Zaila Avant-garde has become the first African American to win the prestigious Scripps National Spelling Bee, but that’s just the tip of her incredible iceberg of achievements.

The Spelling Bee is a competition in which teenagers face off to spell increasingly difficult words.

On Thursday, after hundreds of competitors were whittled down to just two girls, Zaila came toe-to-toe with 12-year-old Chaitra Thummala.

A few words were fired at the two finalists by the competition’s pronouncer before Chaitra finally stumbled on the word “neroli” (a type of fragrant yellow oil).

This handed Zaila the chance to seize the title. All she had to do was spell the next word correctly.

“Murraya,” the pronouncer said, before telling Zaila that it meant a genus of tropical Asiatic and Australian trees.

She didn’t immediately know the word, and had to pause a while to think about its structure.

After a few moments, she began – and spelt it perfectly.

After winning, she said in an interview that she hoped to see more African American students “doing well in the Scripps Spelling Bee” in a few years.

Remarkably, while the vast majority of its top competitors spend their lives training for the competition, Zaila only spent two years working on her spelling before being crowned the champion.

Before that, she set her sights towards a joint career in archeology and basketball, with ambitions to star in the W.N.B.A. She’s also an avid mathematician and reader who has read over 1,000 chapter books.

Her historic victory in the Spelling Bee has been hailed by former US President Barack Obama, as well as Bernice King, the youngest daughter of the Rev. Dr. Martin Luther King Jr.