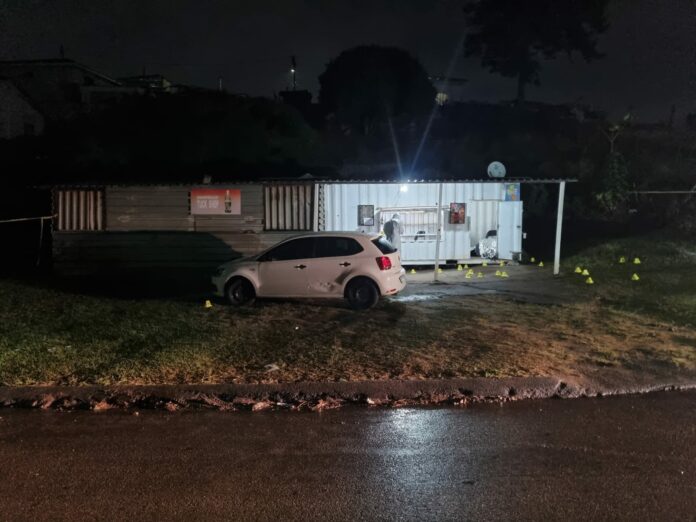 Seven people have been killed in yet another mass shooting, this time at a tuckshop in KwaZulu-Natal, on Saturday evening.

Police confirmed the incident and sources told Scrolla.Africa that three gunmen opened fire at people who were at a tuckshop in Marianahill, KwaZulu-Natal.

One source said the men carrying rifles didn’t take anything from the tuckshop and he could not reveal much information as the scene was still fresh. He said police had cordoned off the crime area and people were milling around, shocked by the news.

KwaZulu-Natal Provincial Commissioner, Lieutenant General Nhlanhla Mkhwanazi has mobilised all available police resources to hunt down what police described as “the heartless killers”.

Police spokesperson Brigadier Jay Naicke said it is alleged that 19:30 a group of unknown men opened fire at people who were at a tuckshop in Marianhill killing six men aged between 30 and 65 years old.

Brigadier Naicker said one other man who sustained gunshot wounds was transported to the hospital where he died on Sunday morning.

“This incident once again demonstrates our concern that firearms are contributing to the high levels of crime in the province and we are advocating for stricter regulations regarding the management of legal firearms as many of them end up being used by criminals. We will do everything within our control to bring these killers to book,” said Lieutenant General Mkhwanazi

The incident comes less than 48 hours after eight women were gang raped and robbed of their belongings in Krugersdorp, west of Johannesburg.

The country has been embroiled in violent incidents with the recent tavern shootings in Soweto, Katlehong, Pietermaritzburg, Thembelihle, and random shootings of civilians in Alexandra in recent weeks.

Police minister Bheki Cele has visited most of the crime scenes and has maintained that the shootings are not related.