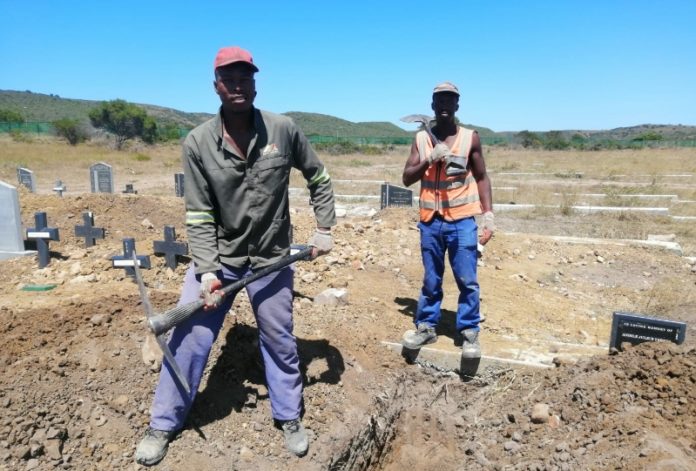 In 2016 Sinethemba Marali from KwaNoxolo Township in Port Elizabeth quit his job as an electrical engineer to become a gravedigger.

He soon earned a lot more.

But since Covid attacked the nation, Sinethemba has been really raking in the money!

Scrolla.Africa caught up with him at the Bloemendal Cemetery on Friday where he was digging graves.

“I worked four years as an electrical engineer for a Durban company and I was earning R10,000 a month,” he says.

He looked at the business and says he saw how workers digging graves earned R650 a grave. “They made a lot of money just from Wednesday to Saturday morning,” he says.

So he ignored his family’s advice – in 2016 he quit his job and started digging graves for his father’s company.

In 2017 he joined up with his ex-convict brother and started a grave digging company that got contracts with the big funeral parlours.

“Since then we never looked back,” he says.

The 38-year-old father of two says that since Covid demand has soared and they’ve employed four workers.

They’ve recently been digging at least 30 graves a week.

His brother, Ayanda Tshakweni, is a father of seven and also an apostle. He went to prison when he was 34, became a born-again Christian and joined the 28 gang.