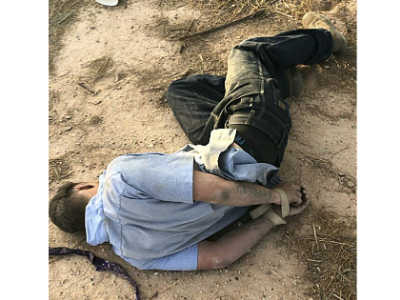 Some people will do almost anything to get off work – but a man in the American state of Arizona took it to extreme lengths by tying himself up and faking his own abduction and kidnapping.

He also invented a story of treasure hidden in the desert.

The New York Times reported that after responding to a call, police found the man, discovered to be 19-year-old Brandon Soules, with his hands bound behind his back by a belt and a hankie “stuffed in his mouth”.

Soules told officers that he had been abducted by two masked men who struck him on the back of his head and knocked him unconscious.

He told investigators that he had been kidnapped because his father had a large amount of money hidden in the desert.

Hospital records showed that Soules had no concussion or injury to his head and text messages did not show messages or phone calls he described.

Eventually, Soules admitted that he had made the whole story up. He has been arrested and charged with false reporting, the police said in a statement.

According to the Times, Soules worked at a car shop, the Tire Factory, where he installed tires and drove around to pick up parts for the store. According to Soules’s Facebook profile, he no longer works there.