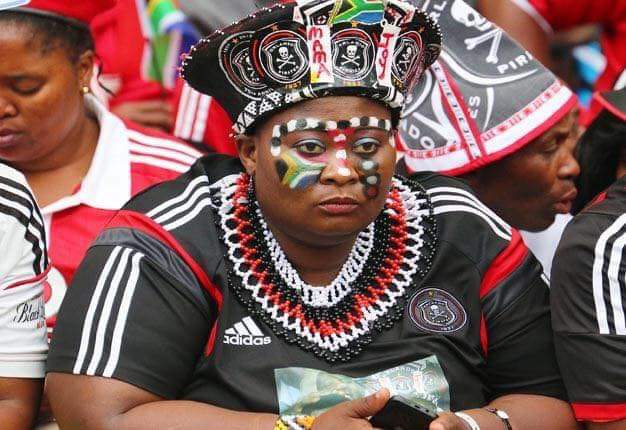 Mama Joy Chauke, the well-known Orlando Pirates supporter is desperately unhappy that she and her fellow Bucs supporters won’t be at Orlando stadium to watch the Soweto derby when the two Soweto rivals face off on Sunday.

The last time the two teams played was in the 2014/2015 season and the match ended in a 1-1 draw with Lehlohonolo Majoro scoring for Pirates and Siyabonga Nomvete scoring for Swallows.

After that, the demise of Swallows saw the club get relegated three times in a row. Chairman Panyaza Lesufi started the revival of Swallows at the lower league under the new name Swallows FC.

The return of Swallows was welcomed by the football community when they bought their GladAfrica Championship (NFD) status from Maccabi FC. The club got automatic promotion back to the top flight football last season.

Pirates supporter, Mama Joy said: “It would have been nice to welcome Swallows back to the PSL with other supporters at the stadium. I’m heartbroken that I won’t be able to watch the match live.”

She encouraged supporters to watch the match on TV.

“We understand that Covid-19 is still here and we have to follow the protocols,” she said.

She said soccer fans can expect many goals.

“We know that Swallows is playing but we will beat them at Orlando Stadium. I see three goals for us,” said Joy Chauke.

The in-form and confident Swallows come into the match with an unbeaten record while Pirates want to come back following a 1-0 defeat to Mamelodi Sundowns in the first match of the year. Pirates star, Vincent Pule will miss the match as will Sundowns’ Zaphaniah Mbokoma.

A win for the Dube Birds could move them to the top of the DStv Premiership table depending on how Sundowns plays against Baroka on Saturday afternoon.

The Orlando Pirates vs Swallows FC match is scheduled for 15:30, Sunday afternoon at Orlando Stadium.