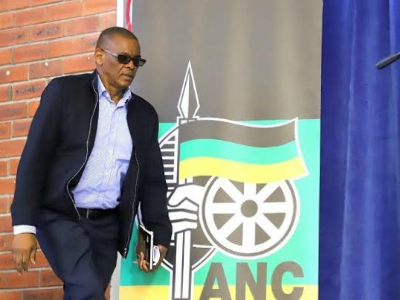 ANC secretary-general Ace Magashule was due to give a speech after his court appearance, but he instead drove past the crowd that waited for him.

Despite the current Covid-19 regulations, hundreds had gathered in the nearby Hertzog Plein Park to await Magashule’s address. Just 200 metres away, large numbers of police officers surrounded the Bloemfontein Magistrate’s Court with barbed wire and police armoured nyalas.

Andile Lungisa told the discontented crowd that Magashule would not be addressing them.

He said: “This gathering is not allowed in terms of the regulations. But we have to support the SG. Some of us went straight to jail when we were wanted. We never ran away. We will come back to support him on 11 August.”

Khamelo Mlungisi, who was present in the crowd, said he came all the way from Johannesburg to show his support.

He told Scrolla.Africa: “I know the gathering is not allowed but we are talking about Magashule here. This is a person who was willing to die for South Africans during the apartheid era. I am also willing to die for him. We don’t care about Covid-19.”

Magashule and 14 others appeared in the Bloemfontein Magistrate’s Court on fraud and corruption charges relating to the controversial R255m asbestos tender. This happened during Magashule’s tenure as Free State premier. All 15 suspects appeared briefly in court before the trial was transferred to the high court on 11 August.

Following the illegal gathering at the Hertzog Plein Park, police spokesman Brigadier Motantsi Makhele said a case has been opened for investigations under the Disaster Management Act.

He said that no social distancing took place and masks were not used.

Magashule held a press conference later that day in Bloemfontein, in which he told journalists that he is not guilty until proven by the courts.

He also told reporters that he will not be stepping down until the ANC branches which appointed him had their voices heard on this decision.