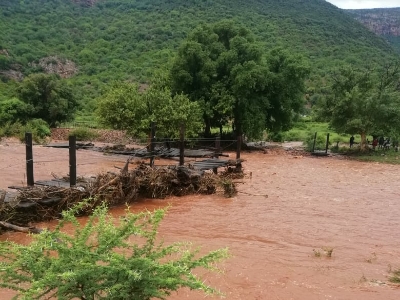 For over 20 years the residents of Sane Village in the Makhado Municipality, Limpopo have pleaded for the bridge over the Mufongodi river to be repaired. But their requests have fallen on deaf ears.

It has taken the tragic death of 75-year-old madala Simon Ratshilumela for the Makhado Municipality to pay any attention to them.

Residents said that since 2000 they have been promised a proper bridge many times but the villagers have been using a makeshift cable bridge to get to the other side during heavy rains.

Ratshilumela fell ill last week and could not be taken to hospital as the river was overflowing.

In the end, he passed away and the family had to make use of a tractor to get the body to the mortuary as the river was still high and a hearse could not pass.

After cries from the community the Makhado Municipality erected a cable bridge overnight to allow the community to give the old man a dignified funeral and he was finally buried on Saturday.

Bereaved family member Nndutsheni Ratshilumela said they were relieved that they finally gave their father a decent funeral after watching him die without help.

“We hope his death was not in vain and served as an eyeopener for the government and highlighted the plight of our community,” he said.

“We are thankful that our father was given a decent sendoff.”

“We can tell the community that a bridge is to be constructed here starting from March 2021. We have given the contractor six months to complete the bridge,” he said. The contractor was introduced to the community during the week.